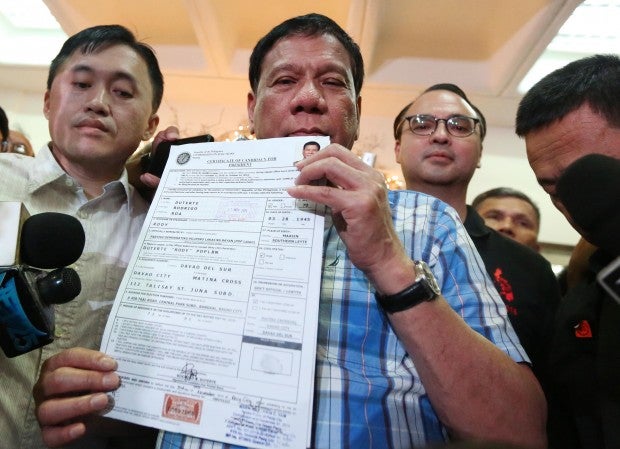 The Commission on Elections (Comelec) First Division has junked the petition seeking to disqualify Davao City Mayor Rodrigo Duterte from the 2016 presidential race, according to the candidate’s camp.

But at a news conference called by the Commission on Elections (Comelec), Commissioner Christian Robert Lim said the petition is still up for consideration.

Lawyer Vitaliano Aguirre said the division dismissed the petition filed by UP Diliman University Student Council (USC) chair John Paulo delas Nieves who sought the cancelation of the certificate of candidacy (COC) of Duterte after he and his lawyer failed to appear in the preliminary conference on the case.

Delas Nieves said that due to Diño’s defective COC, Duterte had no bona fide candidate to substitute for.

“On account of the material defect in the COC of Diño, which is evident on its face, the certificate of candidacy is therefore null and void and no valid candidate exists for whom Rodrigo Duterte can substitute. Diño himself could never be considered to have ever filed a valid certificate of candidacy,” Delas Nieves said in his petition.

With delas Nieves’ petition junked, the Comelec is left with two more disqualification cases against the feisty mayor. AJH/KS