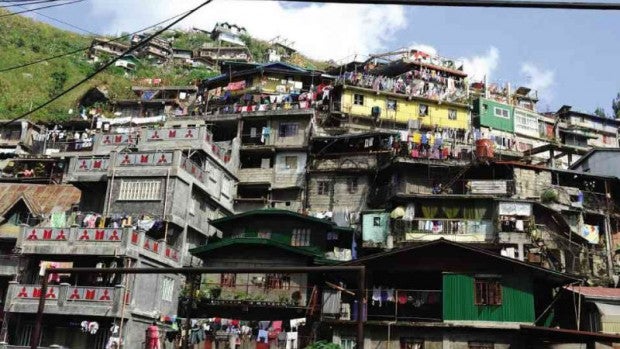 TOURISM TARGET Stone Hill, a craggy mountain community along Kilometer 3 in Benguet’s capital town of La Trinidad, is set to be transformed into a giant mural inspired by Brazil’s favelas. Residents have volunteered to convert their homes into a giant art piece that was designed by artists from Tam-awan Village in neighboring Baguio City. EV ESPIRITU/ INQUIRER NORTHERN LUZON

LA TRINIDAD, Benguet—Families living in a craggy mountain community here called Stone Hill are being trained so they could help Baguio artists convert their houses into a giant mural, a project that was inspired by Brazil’s favelas.

Favelas are low-income, crime-plagued slum communities that the Brazilian government has transformed into huge canvasses, part of that country’s effort to reclaim these neighborhoods from drug lords and criminal gangs.

Slums or shantytowns within or on the outskirts of large cities in Brazil, especially Rio de Janeiro and Sao Paulo, have brightened with colorful designs through the Favela Paint Project, initiated by artists Jeroen Koolhaas and Dre Urhahn in 2005.

But the proposed Stone Hill mural in this Benguet capital is a tourism “beautification” initiative developed by Venus Quinto-Tan, director of the Department of Tourism (DOT) in Cordillera and not a social engineering measure.

More than 200 households, nestled on the side of the hill along this town’s Kilometer 3, have agreed to make their homes part of the mural, according to La Trinidad Mayor Edna Tabanda.

The household volunteers will start training on Jan. 13 after the signing of a memorandum of agreement between La Trinidad and the DOT last week.

The local government will provide paintbrushes and build scaffolding, while residents will handle all of the painting chores, according to Tabanda.

The Stone Hill project has drawn the attention of a leading paint company, which offered to donate paint to complete the mural.

Jordan Mang-osan and members of the Baguio arts community, Tam-awan, have designed the mural to be a connective landscape of sunflowers and rainbows.

The artists have been commissioned to oversee the project, said Maria Elena Catajan, the Tam-awan gallery representative who helped develop the project.

The mural is supposed to last for five years. The artists and the Stone Hill community volunteers are required to retouch the mural “should it be necessary” by the middle of 2018, Catajan said.

Putting up a massive mural would not be easy. “We have asked architects and information technology experts to help us calculate how each Stone Hill house fits in the mural. We did not want people traveling to La Trinidad to see only a façade of sunflowers from afar. Each house could be wrapped in artwork when people travel close to the houses,” Catajan said.

She said houses would be whitewashed before the mural could proceed. The mural is expected to be completed by March in time for summer.

The painting of Stone Hill will be a community effort, Tabanda said, so government employees, local businessmen and even police officers, may spend some time working with paint brushes. With a report from Vincent Cabreza, Inquirer Northern Luzon