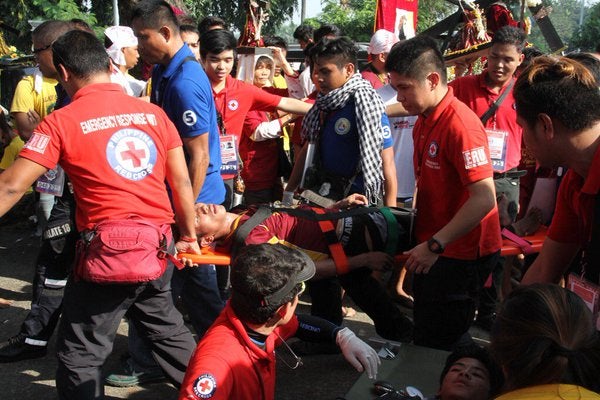 The Philippine Red Cross has assisted over 800 Nazarene devotees who have joined the annual traslacion or the Black Nazarene procession.

In a statement on Saturday, PRC said it had extended medical assistance to 851 devotees as of 3 p.m.

Of the 851 devotees, 491 sought blood pressure monitoring, 442 were treated for wounds, abrasions, bruises and dizziness while 26 experience difficulty of breathing, fainting and hyperventilation.

PRC said 11 devotees were brought to nearby hospitals for further medical examination. The agency said it also extended psychological support to 25 devotees and helped seven individuals find their lost families or guardians.

PRC has deployed 400 personnel, 20 ambulances, rescue boats and equipment to assist the millions of devotees who joined the traslacion.

The agency has set up various medical outposts along the seven-kilometer Black Nazarene route.

As of 4 p.m., authorities have recorded one fatality due to seizure.

Gwendolyn Pang, secretary general of the Philippine Red Cross, said a 27-year old male devotee was found “lifeless, breathless, and pulseless” after he joined the procession.

The incident happened near the Manila City Hall before noon Saturday.

Pang, however, refused to reveal the identity of the victim until his family was informed.