What Went Before: The calls for Marcos hero’s burial | Inquirer News

What Went Before: The calls for Marcos hero’s burial 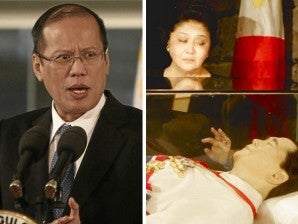 President Benigno Aquino (left) says there will be no state funeral or any kind of state honors for the late Ferdinand Marcos whose remains lie in an airconditioned glass case in Batac, Ilocos Norte. PHOTOS BY EDWIN BACASMAS, INQUIRER AND AP

Calls for the burial of the dictator Ferdinand Marcos at Libingan ng mga Bayani in Makati City were revived by his family and political allies in February.

This followed the burial at the cemetery for heroes of retired General Angelo Reyes, a former chief of staff of the Armed Forces of the Philippines who committed suicide amid allegations he had received huge military payoffs.

In March, 216 congressmen signed a resolution—initiated by Sorsogon Representative Salvador Escudero, a former Marcos Cabinet secretary—urging President Benino Aquino III to allow a hero’s burial for the dictator who ruled the country for 20 years, 14 under martial law.

Marcos was ousted in the 1986 Edsa People Power Revolution and died three years later in exile in Hawaii. His body was flown back in 1993 to his hometown in Batac, Ilocos Norte, and preserved in a refrigerated crypt.

Mr. Aquino, who had rejected a hero’s burial for Marcos while campaigning for the presidency last year, declined to make a decision on the issue and instead ordered Vice President Jejomar Binay to study the proposal.

Binay launched a survey by text and e-mail on the issue. Subsequently, he recommended that Marcos be given full military honors and buried in Ilocos Norte.

In an interview with The Associated Press on June 17, Mr. Aquino ruled out a burial for Marcos at Libingan. “Not during my watch,” he said, a statement he repeated in a news conference with foreign correspondents yesterday.

Mr. Aquino also said that while he was finalizing a decision on Binay’s proposal, officials were verifying if military honors had already been accorded to Marcos after his remains were flown back in 1993. If that were the case, Mr. Aquino said, “then the only remaining act that has to be done is the actual burial in Ilocos Norte.”

Mr. Aquino later said that the issue had long been settled by former President Fidel V. Ramos, who allowed the return of Marcos’ remains. He cited an agreement between the state and the Marcos family, specifying the burial of Marcos in Ilocos Norte.

In August, Binay said that the Marcos family had agreed to the dictator’s burial in Ilocos Norte. Denying the Binay claim, the Marcoses said there had been no formal proposal on the matter.  Inquirer Research