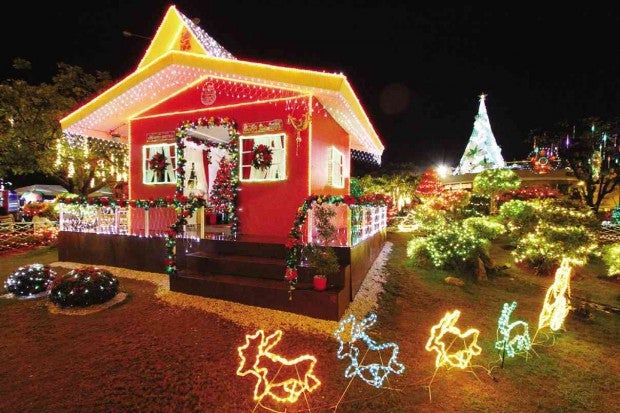 This structure has been decorated to look like a Santa Claus house during the Yuletide season. Mandaue City officials plan to redecorate the structure on Jan. 15 in time for the feast of Sto. Niño in Cebu province. TONEE DESPOJO / CEBU DAILY NEWS

Sheila Mae Bascon and her boyfriend, Romeo Agravante, were heading for Cebu City from Liloan town in northern Cebu when something caught their attention.

The life-size, brightly lit decorations at the plaza in front of the Mandaue City Hall made the young couple disembark from the public utility jeepney.

Bascon, 19, took out her mobile phone so she and Agravante, 21, could take a selfie in front of the red “Santa Claus” house.

“The Christmas decor is very attractive and makes me want to spend time at the plaza instead of going to the mall,” said Bascon.

She is just among the hundreds of people who flocked to the Mandaue plaza, which transforms at night into a Christmas village that glows with 6,500 lights.

“We cannot just have the same old decor that we used in the past years,” said Cabigas.

So city officials had a Christmas tree that stood in the same area for years removed and replaced it with a Santa Claus house.

A portion of the plaza has been transformed into a pocket park for children where life-size replicas of animals like lions, tigers, deer and zebras, and oversized cement serve as giant playthings.

Aside from the decor, people also enjoy a nearby bazaar that sells good food and cheap ready-to-wear clothes.

“The place is very nice. We no longer have to go far to feel the spirit of Christmas,” Bascon said.

Cabigas said the city government is happy over people’s reaction to the Christmas village.

“It makes us proud that people appreciate what we have done,” Cabigas said.

Compliments from visitors are more than enough to compensate for the extended working hours given by Cabigas and 30 other City Hall employees just to make sure that the Christmas village was finished in a week in time for the lighting up ceremony on Dec. 15.

Cabigas drew her concept of the Christmas village in her sketch pad.

She asked for an inventory of materials available at the city warehouse before workers started building the Santa Claus house and children’s park on Dec. 7.

“I also solicited ideas from our electricians and architects. We adjusted the design as we started actual work,” she said.

The Mandaue City government shelled out a minimal amount to replace damaged Christmas lights and replace these with light-emit ting diode (LED) lights, which they wrapped around a Christmas tree that was placed on the roof of a two-story building at the back of the Santa Claus house.

Cabigas said city officials didn’t put the Christmas tree in the Christmas village because they didn’t want it to compete for attention with the Santa Claus house.

The base of the Christmas tree is a giant seashell about 12 to 15 meters tall.

Cabigas said GI wires provided shape to the tree and held the decorations together. Trimmings in the tree were made of used clothes, flowers and LED lights.

At least 30 electricians, welders, carpenters and personnel from the city’s building maintenance office worked on shifts from 8 a.m. to 2 a.m. daily to make sure that the Christmas village was ready by Dec. 15.

Cabigas said they used angular steel bars for the foundation of the Santa Claus house and marine plywood for its walls, floor and roofing.

“We made sure that our design was sturdy because we were anticipating that people would want to enter the house for a selfie or groupie,” she said.

The 20-by-16-square-meter structure has five windows and a door. Inside are a 3.7-m Christmas tree, Santa Claus figurines, a red sofa and carpet. A total of 365 lights adorned the roof and walls of the house.

They used steel bars as fence to make sure that the structure is not vandalized.

The Christmas village was formally opened to the public during a lighting ceremony around 10 p.m. on Dec. 15, a day before the start of the nine-day dawn Masses.

Since then, up to a hundred people have been visiting the city’s Christmas village every night.

City Hall security personnel are detailed to man the gate of the Santa Claus house from 7 p.m. to 11 p.m. to regulate the flow of people and prevent the decor from being vandalized.

Guards also tasked with ensuring that visitors spend only three to five minutes inside the Santa Claus house.

“We have to regulate the entry because items inside the Santa Claus house are starting to be vandalized. There have been instances where children ripped off lights from the Christmas tree inside the house,” Cabigas said.

Cabigas said they intend to operate the Santa Claus house until after New Year to maximize its use.

On Jan. 15, they would change the house’s design and convert it into a Sto. Niño house in preparation for the annual feast of the Holy Child on Jan. 17.

Cabigas said they will remove the Christmas tree, Santa Claus, the red carpet and sofa from the house and replace these with flowers and images of Sto. Niño.

The theme may change but people are expected to still flock to the place.