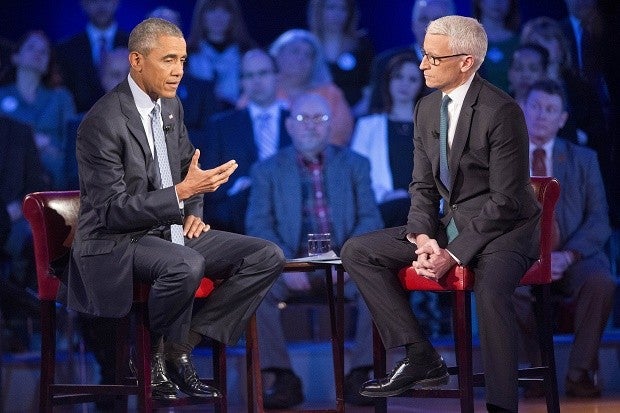 President Barack Obama, left, speaks during a CNN televised town hall meeting hosted by Anderson Cooper, right, at George Mason University in Fairfax, Va., Thursday, Jan. 7, 2016. Obama’s proposals to tighten gun controls rules may not accomplish his goal of keeping guns out of the hands of would-be criminals and those who aren’t legally allowed to buy a weapon. In short, that’s because the conditions he is changing by executive action are murkier than he made them out to be. AP

Speaking at a CNN forum on gun violence in America, Obama says he can understand why an Iowan living in a rural area would want to own a gun for protection, while gun ownership in Chicago can be more dangerous.

Obama says first lady Michelle Obama told him she would want a shotgun or a rifle for protection if she lived in an isolated area. He said: “She was absolutely right.”

Obama is trying to make the case for tightening gun control rules, while fighting claims by opponents of such regulations that he’s trying to take away people’s Second Amendment rights.