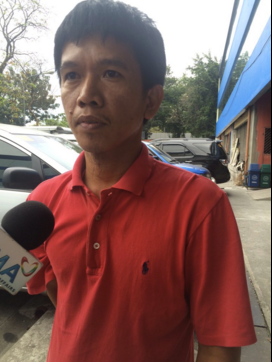 The driver who was caught in a viral Facebook video cursing and threatening to hurt his passenger after refusing to shell out additional cash on top of the metered fare has shown up before the Land Transportation and Franchising Regulatory Board (LTFRB) on Wednesday.

The driver, who was identified as Roger Catipay, showed up at the LTFRB main office in Quezon City along with the operator of AFG Taxi Ariel Gamboa.

Facing LTFRB Chairman Winston Ginez, Catipay refused to undergo a drug test, saying that he would tap the help of a lawyer before undergoing such procedure.

Ginez said that the franchise of AFG Taxi might be revoked if it is proven that Catipay has taken illegal drugs.

Catipay and Gamboa were also asked to show cause in writing and to explain why the Certificate of Public Convenience of AFG Taxi should not be suspended due to the following supposed violations: contracting passenger; overcharging of fare; harassment/arrogant driver; and the driver making a threat to the life of a passenger.

On Tuesday, Joanne Garcia shared on her Facebook account a video showing Catipay forcing her to pay an additional fare when they arrived at the Philippine Overseas Employment Administration (POEA).

She recounted that Catipay asked her to pay P250 but she insisted to use the taxi meter.

Arriving at POEA, Garcia handed P200 to pay for the P140 fare. Instead of getting change, Garcia got invectives from Catipay.

She alleged that Catipay was using illegal drugs.

Garcia also went to the LTFRB on Tuesday to formally file a complaint against Catipay.

The LTFRB has set the hearing on the case on January 12. AJH/ With a report from Dona Dominguez-Cargullo, Radyo Inquirer/CDG