US Pacific Fleet shrinks even as China grows more aggressive 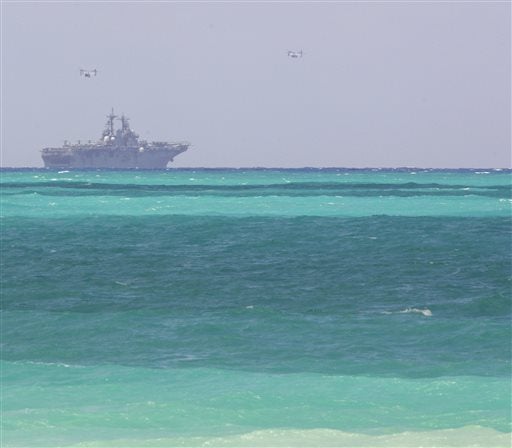 PEARL HARBOR, Hawaii — When the U.S. wanted to show the world it didn’t recognize what it called China’s “excessive” territorial claims in disputed waters of the South China Sea this fall, it sent a warship near one of Beijing’s newly built artificial reefs.

The move came amid a debate about whether the U.S. has enough ships to meet challenges posed by a fast-growing, increasingly assertive Chinese navy that is unsettling some of its neighbors. China announced last week that it would build its second aircraft carrier, this one with domestic technology.

The Navy and its regional component, the U.S. Pacific Fleet, both have fewer ships now than in the mid-1990s. Navy officials say vastly improved technology on those vessels outweighs any disadvantage from a drop in numbers.

Questions about whether the Pacific Fleet has enough resources are more of a reflection of regional anxieties than the Navy’s actual capability, said its commander, Adm. Scott Swift.

Even if the entire fleet was in the South China Sea, he said, he’d still get asked whether the U.S. was bringing more forces.

“It’s this sense of angst that I hear from those in the region, driven by the uncertainty and the rhetoric and, you know, the challenges that the region is facing right now,” Swift said. “But I’m very comfortable with the resources I have.”

Peter Jennings, an expert at the Australian Strategic Policy Institute think tank said the issue in peacetime is whether there are enough American vessels to reassure friends and allies and demonstrate U.S. capacity to use power when it needs to.

In wartime, it comes down to whether enough platforms survive missile strikes to carry on their work, Jennings said.

“I think this is emerging as a serious long-term problem.”

The Pacific Fleet currently has 182 vessels, including combat ships like aircraft carriers as well as auxiliary and logistics vessels, said spokesman Cmdr. Clay Doss. That compares to 192 nearly two decades ago.

Around the world, the Navy has 272 ships usable in combat or to support ships in combat, nearly 20 percent less than 1998. The current total includes 10 aircraft carriers.

Swift said he would rather have the Navy he has today — and its advanced technology — than the Navy of two decades ago.

He pointed to the USS Benfold, a guided missile destroyer upgraded with new ballistic missile defenses, as well as three new stealth destroyers, the DDG-1000, in the pipeline, as examples.

One consequence of a smaller fleet has been more time at sea. Retired Adm. Zap Zlatoper, who commanded Pacific Fleet in the 1990s, said six-month deployments used to be “sacrosanct” as anything longer made it harder for the Navy to retain sailors.

Ships now deploy for an average of seven to nine months, though the Navy plans to lower this to seven.

Ship conditions have also suffered. The USS Essex left an exercise with Australia early in 2011 and skipped another with Thailand the following year because it developed mechanical problems after delaying maintenance to stay at sea.

Bryan Clark, a senior fellow at the Center for Strategic and Budgetary Assessments, a Washington think tank, said these are signs the status quo is unsustainable.

In a November report, Clark outlined alternatives: build more ships, though this would require money Congress may not give the Navy, or deploy less, though the Pentagon has been reluctant to accept less of an overseas presence.

The other choices: keep more ships at overseas bases where they would be closer to where they operate or mix up how ships deploy, for example by sending fewer escorts with an aircraft carrier which would free some ships to operate separately.

China’s coast guard and other maritime law enforcement fleet, meanwhile, has upward of 200 ships — more than the combined fleets of neighbors with competing claims to tiny islands in the East and South China Seas.

The U.S. Coast Guard has about 280 cutters, or vessels at least 65 feet in length, though they primarily operate stateside.

China has also grown more aggressive in asserting its claims to disputed territory. Since December 2013, it’s built what the U.S. estimates to be 3,000 acres of artificial islands in the South China Sea using sand dredged from the ocean floor.

China has said the islands are meant to help ships, fishermen and disaster relief.

The U.S. says the islands will enable China to expand its maritime law enforcement and naval presence further south. It worries China could use them to disrupt sea traffic in the South China Sea, a thoroughfare for 30 percent of global maritime trade.

Some of China’s ships are rudimentary, like its existing aircraft carrier.

But Narushige Michishita, Japan scholar at the Woodrow Wilson International Center for Scholars in Washington, said the lay person doesn’t know this so the vessels have the same psychological effect on the public as more advanced ones.

Further, he said U.S. forces are spread around the world while China is focused on its own neighborhood.

“So even if the United States spends much more than China, it doesn’t mean the local balance stays the same. The local balance in Asia is rapidly changing,” Michishita said.