Homicides up 70 percent in El Salvador, among deadliest nations 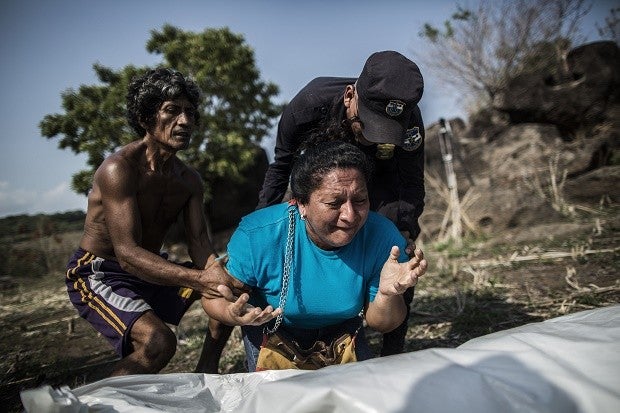 In this May 28, 2015, file photo, the sister of Alberto Hernández Escalante mourns over the body of her brother, found in a clandestine grave, in a rural area near Caserio el Chumpe, El Salvador. In a report released Monday, Jan. 4, 2016, authorities said that killings spiked by nearly 70 percent in El Salvador in 2015, resulting in a sky-high homicide rate that could make it the world’s most violent nation. AP FILE PHOTO

SAN SALVADOR, El Salvador — Authorities report that killings spiked by nearly 70 percent in El Salvador in 2015, resulting in a sky-high homicide rate that could make it the world’s most violent nation.

The overall homicide rate was 104 per 100,000 inhabitants. That puts the country in a position to take over neighboring Honduras’ dubious title of murder capital of the world.

Researcher Jeannette Aguilar says the rate “puts us at the head of the world’s most violent nations.”

Salvadoran authorities blame most of the killings on gangs involved in drug trafficking and extortion rackets.