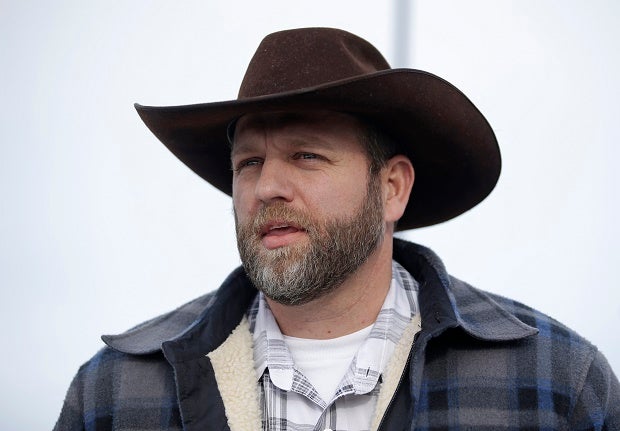 Ammon Bundy, one of the sons of Nevada rancher Cliven Bundy, speaks with reporters during a news conference at Malheur National Wildlife Refuge headquarters Monday, Jan. 4, 2016, near Burns, Ore. The group calls itself Citizens for Constitutional Freedom and has sent a “demand for redress” to local, state and federal officials. Armed protesters took over the Malheur National Wildlife Refuge on Saturday after participating in a peaceful rally over the prison sentences of local ranchers Dwight and Steven Hammond. AP Photo

BURNS, United States—A band of armed anti-government activists occupying a federal wildlife reserve in rural Oregon dug in for a third day Monday, as the ranchers they claimed to be defending denounced the siege and turned themselves in to the law.

The loose-knit band of farmers, ranchers and survivalists—who have dubbed themselves “citizens for constitutional freedom”—began the siege in protest at the jailing of Dwight Hammond, 73, and his son Steven, 46, convicted of arson for setting fire to federal land.

Up to a hundred protesters are believed to be holed up at the snowy visitor’s center for the Malheur Wildlife Refuge, which they took over to show solidarity with the Hammonds, and demand that a court rescind an order for their arrest.

The FBI is was working with local law enforcement to bring a peaceful end to the standoff, after the protesters warned they did not rule out violence if authorities stormed the site.

The rancher father and son who triggered the armed siege have firmly distanced themselves from it, and on Monday turned themselves in to begin serving their five-year sentence.

“The Hammonds have turned themselves in today at 1:37 pm, in accordance with the law, and are currently in custody at Federal Correctional Institution in California,” the local sheriff, David Ward, told a press conference.

It was unclear whether their surrender to authorities would end the siege.

The Oregon protest is led by a 40-year-old rancher named Ammon Bundy. His father, a Nevada rancher named Cliven Bundy, was at the center of a previous armed standoff with government authorities in 2014, that time over grazing rights on public lands.

Bundy told reporters he was fighting for freedom for the Hammonds, saying they were harassed for refusing to sell their ranch to the government.

But Bundy and his brother Ryan are also calling on the federal government to relinquish control of the Malheur reserve.

Sheriff Ward said the protesters’ ultimate goal was “to overthrow the county and federal government in hopes to spark a movement across the United States.”

The Hammonds have set themselves apart from the armed movement, and from Bundy in particular.

“Dwight and Steven Hammond respect the rule of law,” said a statement sent to AFP by their attorneys Alan Schroeder, Kendra Matthews and Lawrence Matasar.

“They have litigated this matter within the federal courts for over five years and, in every instance, have followed the order of the court without incident or violation. That includes serving the entire sentences imposed in this case.”

Father and son each already have served several months for arson, but a judge ordered them back to prison to serve the remainder of their five-year sentence after they lost an appeals court review.

The Hammonds were convicted after lighting what they said was a controlled fire on their ranch in Harney County that spread, consuming 139 acres (56 hectares) of federal land.

But witnesses at their trial said that Steven Hammond had illegally slaughtered deer on federal property during a hunting expedition and then handed out matches in order to “light up the whole country on fire,” according to a Justice Department statement.

So far, there has been no visible police presence at the reserve, where several armed men in vehicles guarded the entrance while others kept watch from a lookout tower.

School was canceled in the area for the week, and the county courthouse was closed Monday “for security reasons.”

On the Internet, public opinion was sharply split on what was quickly dubbed the #Oregonstandoff, with many branding the takeover an act of domestic terrorism, while others saw an act of resistance to government oppression.

A Gallup poll released last month shows a majority of Americans view “big government” as the biggest threat to the nation in the future, when asked to choose between that, big labor and big business.

The theme has been embraced by the Republican party’s contenders for the 2016 presidential nomination, who so far have been relatively silent on the siege—with the notable exception of Ted Cruz who urged the protesters to stand down peaceably.