Education in a flash | Inquirer News

Education in a flash 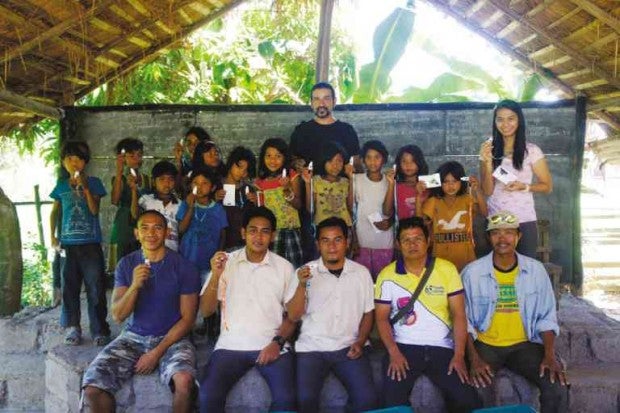 A flash drive is set to change the lives of Mangyan kids in Occidental Mindoro province.

After taking it to African countries, Keepod brought the “cheapest computer in the world” to Karyandangan Minority School (KMS) in Mamburao town recently. The revolutionary USB (universal serial bus) flash drive does more than store data.

Haim Katzav, Keepod’s project lead in the Philippines, says that many people want a computer but do not have the money to buy one so “Keepod came up with a USB.”

An ordinary flash drive is capable of storing data. But Keepod’s USB, Katzav says, has not just storage capacity but also an operating system at a price of only $7, or about P300 for the equivalent of a computer.

Katzav says the “computer” USB will need only  a screen, keyboard and processor from any desktop computer or laptop, even an old one. The flash drive is inserted into the port and, after a few clicks, a desktop version of Android appears. (Android is the operating system that Google uses for mobile phones.)

The Keepod USB does not need to tap into the host computer’s operating system and will not affect it either, Katzav says.

“The old computer becomes the body of the new one and the Keepod becomes the soul,” he says. “Students can store data, files, photos, homework. They can bring their Keepod home then back to school. Having their own ‘personal computers,’  they do not have to share files, reducing the risk of viruses and loss of data.”

The device is called Keepod because the student gets to keep it. But Keepod is actually Hebrew for hedgehog, hence the logo.

Katzav, Krista Taclan and her brother Ryan, chief of staff of  a Teacher party-list group, are distributing free flash drives to 18 Grades 4-6 Mangyan pupils at KMS, more than 2 kilometers from the highway and reachable only by crossing a river and streams, then walking. 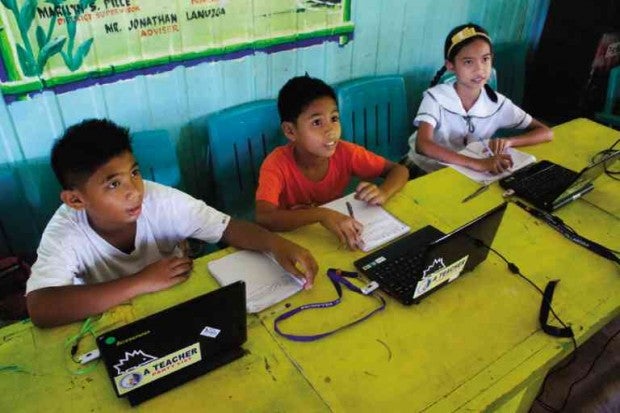 THREE class group leaders research for a climate change lesson. In the middle is Kiel Nuñez.

The Taclans arranged for Keepod to bring the flash drive to the school.

The beneficiaries are 9 to 16 years old, says adviser Billy Joe Rosales, 23, who has been teaching at the school for over two and a half years.

The school has one concrete classroom and three classrooms made of light materials. It has 47 students but some have to miss school to help their parents on their farms, he says. Other students are malnourished. Some do not even know their birthdays.

Noting how the children were reluctant to answer questions from the Keepod team, Rosales says the Mangyan are generally shy and meek.

But Rosales has high hopes for his Mangyan students. He thinks Keepod can help familiarize them with technology, “which is what they need in life.”

“They don’t know anything about computers or gadgets. We discuss them in Edukasyong Pantahanan at Pangkabuhayan using illustrations so they will know the basic parts. [But] they lose that knowledge [for lack of computers],” he says.

Taclan says Keepod can make the Mangyan more aware of their rights. The older Mangyan have lost vast tracts of land
because they are illiterate or timid, she says. 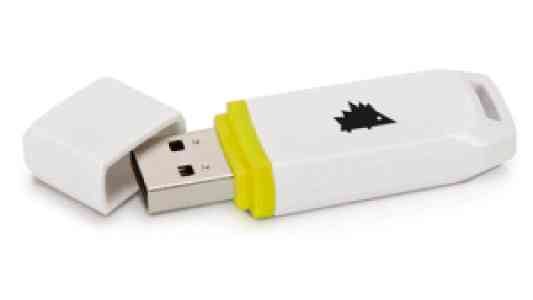 “By bridging the digital divide, I think we are also addressing information poverty. With better access to content available on the Web, these kids will eventually learn what they need, what they should have by right,” she says.

Keepod founders Nissan Bahar and Franky Imbesi, who began their campaign in Israel, noted that seven of 10 people —5 billion globally—are without access to personal computers and the Internet.

“They wanted to close the gap between those with computers and those without,” says Katzav. “Keepod envisions a world where people learn more about their needs and dreams through access.”

Instead of aspiring to provide each person a computer to resolve lack of access, Bahar and Imbesi developed an easy-to-use and cheap device.

With crowd-funding website Indiegogo, they launched the  program in the slums of Nairobi, Kenya. The company also has projects in other parts of Kenya and in Liberia, Tanzania, Cameroon, Malawi, Costa Rica and Zambia. They even have one for Syrian refugees.

The project with the Mangyan is the second in Mindoro, their first area of coverage in the Philippines and Asia, says Katzav. They started a couple of months ago with Grade 5 pupils of Tangkalan Elementary School (TES), the mother school of KMS. 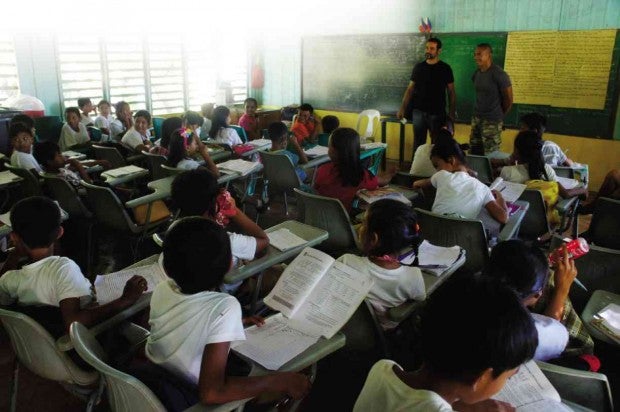 Keepod gave each Grade 5 pupil and each teacher a free flash drive, and the school three netbook computers.

“We chose Mindoro because it’s an island—they don’t have access and facilities,” says Katzav. “We are talking about students who never had an interaction with computers…. You tell them now to do research on flowers, photosynthesis, whatever, they will be able to do that.”

Jonathan Lanusga, adviser of the TES pilot class, agrees. “My room is overcrowded. There should be 35 and yet I have 62. There’s a shortage of teachers and classrooms here. But Keepod has helped.”

He says students now learn faster because the computer gets their attention. “I divide them into six groups, so three teams use the laptop together…. Outputs have improved. They are able to grasp ideas better. When you teach Science, instead of talking, you just tell them to look in the Internet.”

Top pupil Kiel Nuñez says he uses the Keepod to do research and advance studies. “We need to research because the explanations in our books aren’t enough sometimes. Plus, I enjoy using the computer.”

Alphavin Acot-Acot says Keepod helps him find the meaning of words, since they do not have a dictionary at home.

Kyle Xyra Tagumpay says, “We now have our own e-mail addresses with Gmail.” 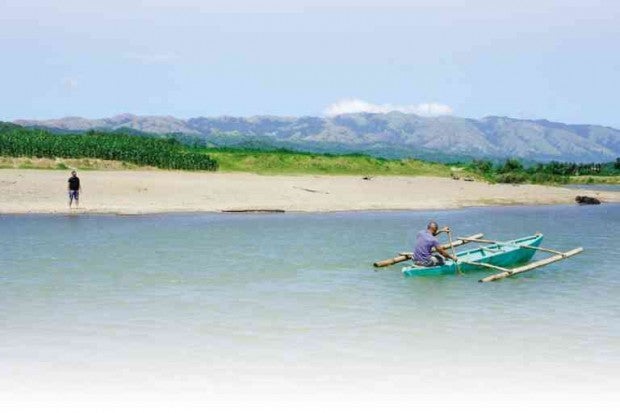 THE KEEPOD team crosses the Mamburao River, the same river the three faculty members of Karyandangan Minority School have to cross on school days, rain or shine.

Even Lanusga learned the ins and outs of computers, especially the Internet. “We access information, too, such as DepEd (Department of Education) lesson plans.”

The school, which serves over 400 pupils, has a computer room that has not been used since its installation in 2014 because no one knows how to use the computers, says school principal Norman Calis, who also oversees KMS.

“Keepod has brought awareness, experience and inspiration,” he says. “The kids are excited about the Internet…. They can now [aspire for] global competitiveness—using Gmail, using computers.”

Teachers now prepare lessons and accomplish reports using diverse sources, says
Information and Communication Technology and Grade 3 teacher Rochelle Tamares.
“I can use Gmail [to] make the school’s reports and send them to the division office. I can download videos and apps, then show them to my kids.”

She adds, “Keepod helps me enormously. The kids are more interested now.”

Some have raised their grades by five points because of  instructional materials accessed through Keepod, she notes.

Tamares says she wants the same for KMS, where she taught for three years before moving to TES.

“My dream as a teacher of indigenous people is for them to be literate, especially when it comes to technology…. I just want them to be updated, to qualify for opportunities out there,” says Rosales.

Keepod is partnering with Outernet, a company that provides virtual libraries for free through special servers, to provide better content for TES and KMS without having to worry about Internet connectivity, says Katzav.

Taclan says there are plans for Keepod to ask companies not to throw away their old computers and to give them instead to schools.

“The challenge for the Philippines is our 7,107 islands. How do they get connected? There is a digital divide that results in information poverty. That poverty needs to be addressed,” she says.

“Keepod is a big-time game-changer,” Katzav says. “Education is something for every country to develop…. Our goal is to bring Keepod to
everyone everywhere.”