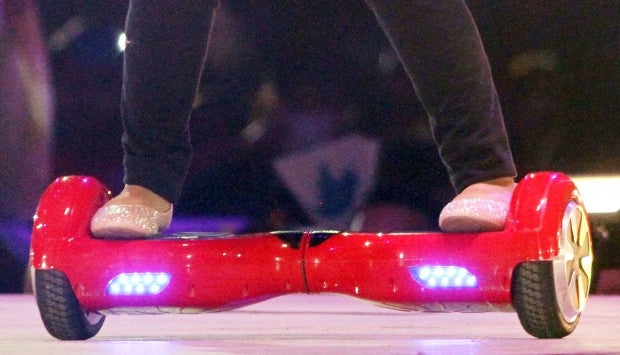 CONTROVERSIAL SCOOTER Here is a close-up of the hoverboard, a two-wheeled scooter that has caught the attention of safety watchdogs following reports of falls, overheating and explosions. INQUIRER PHOTO

LUCKILY for Fr. Albert San Jose of Miraculous Medal Parish in Biñan, Laguna province, his hoverboard did not explode under him or fry him to a crisp as he wheeled himself singing to midnight Mass on Christmas Eve.

He has gone on leave to avoid more controversy after his stunt drew flak on social media, though there is no word about what happened to his hoverboard, the two-wheeled scooter that has caught the attention of safety watchdogs following reports of falls, overheating and explosions, suggesting the gadget may not be perfect yet.

Here the safety group EcoWaste Coalition has asked the government to ban the sale of hoverboards while it is investigating the reports.

EcoWaste Coalition says the government should also temporarily ban hoverboard imports until all “product safety issues have been fully resolved.”

The Department of Trade and Industry (DTI) and the Department of Health (DOH) issued a joint advisory on Dec. 29 calling for caution about the use of hoverboards by minors below 14 years old “in the light of reported health and safety issues/concerns (including fires and explosions) and as a precautionary measure.”

The two agencies said they had formed a panel to investigate the reports, but did not say when the panel would finish the investigation.

A hoverboard is a two-wheel electronic device that requires the user to keep his balance while moving. Some owners use hoverboards in shopping malls and other public places.

Consumer product safety agencies in the United States and the United Kingdom are investigating increasing cases of serious fall injuries involving hoverboards as well as fires due to overcharging of the gadget’s lithium batteries.

Airlines have prohibited passengers from bringing hoverboards aboard, citing the risk of fires and explosion from overheating.

EcoWaste coordinator Thony Dizon said the “logical” step for the DTI and the DOH was to impose a “precautionary ban” on the use and sale of hoverboards while the gadget was under evaluation for safety.

“Pending the initiation and completion of the probe and the adoption of strong safety standards, we find it logical for the government to enforce a precautionary ban on hoverboards,” Dizon said.

Dizon said retailers should also voluntarily remove hoverboards from display or return them to their suppliers until safety issues have been settled.

“The reported fire and fall incidents in Europe and the US involving substandard hoverboards should spur strong product safety, labeling and warning requirements,” Dizon said.