Taiwan and Japan to talk ‘comfort women’ issue next month 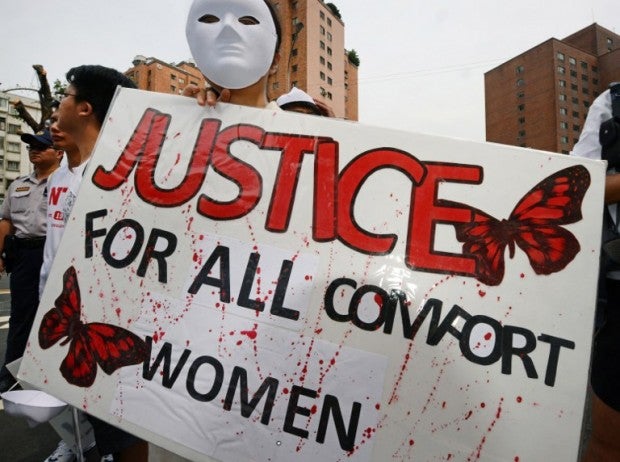 A demonstrator displays a placard as the group demands an apology from Japan over the comfort women issue during a rally in front the Japan Interchange Association in Taipei on August 14, 2013.  afp

TAIPEI — Taiwan and Japan will formally engage in talks over the “comfort women” issue next month and Taipei will demand that Tokyo formally apologize and compensate Taiwanese comfort women who were forced into sexual slavery by the Japanese military during World War II.

Speaking during a press event in Taipei, Foreign Minister David Lin said on Wednesday that the Japanese side has shown goodwill and agreed to engage in negotiations with Taiwan over the comfort women issue sometime next month.

Bilateral communication is going smoothly over the issue, the minister pointed out, adding that he believes the upcoming talks are moving in a positive direction in resolving the long-standing issue.

Before beginning bilateral negotiations, Lin noted that a Taiwanese cross-agency task force formed to deal with comfort women-related issues will first meet in Taipei on Jan. 6.

The task force meeting is expected to be joined by government officials, and representatives from local non-governmental organization that focus on the issue and surviving Taiwanese comfort women, in order to come up with a clear stance.

Currently, discussions over the issue are being conducted by Taiwan’s Association of East Asian Relations and its counterpart, Japan’s Interchange Association.

The two units are quasi-official organizations set up by their respective governments to handle bilateral affairs in the absence of official ties.

Lin’s comments came after Taipei called on Tokyo to engage in such talks as soon as possible after the latter reached out in a deal with Seoul earlier this week.

Japan and South Korea reached a deal on Monday in Seoul under which the Japanese government will give around a billion Japanese yen to a foundation set up by the South Korean government for Korean comfort women. Japanese Prime Minister Shinzo Abe also apologized to all comfort women in his capacity as prime minister later that day.

Following the historic deal, Taiwan’s Ministry of Foreign Affairs called on Japan to promptly launch bilateral negotiations on the comfort women issue in order to compensate victims in Taiwan.

The wording of the Japan-Korea deal, however, does not explicitly state that surviving comfort women will receive direct compensation, but instead states that the fund will provide support for “recovering the honor and dignity and healing the psychological wounds.”

Asked about whether Taiwan will insist on asking Japan for compensation, Lin said the ministry needs to talk with surviving comfort women to find out what wording is more acceptable to them.

“The R.O.C.’s long-standing position has been to request that Japan makes a formal apology and compensates Taiwanese comfort women,” Lin added.

According to the Taipei Women’s Rescue Foundation, more than 2,000 Taiwanese women were forced into sexual slavery by the Japanese Imperial Army during the war, but only four of those who have spoken openly about their suffering at the hands of the Japanese forces are still alive today.

Meanwhile, Japan’s Interchange Association on Wednesday said the deal with South Korea is meant to resolve the long-standing issue that has complicated bilateral ties for decades.

Japan will honestly face and handle the issue with other countries based on the different situations of each country, it said. Also, it would not disclose details of discussions with Taiwan.