3 children injured due to alleged Marine soldiers’ strafe in Sulu 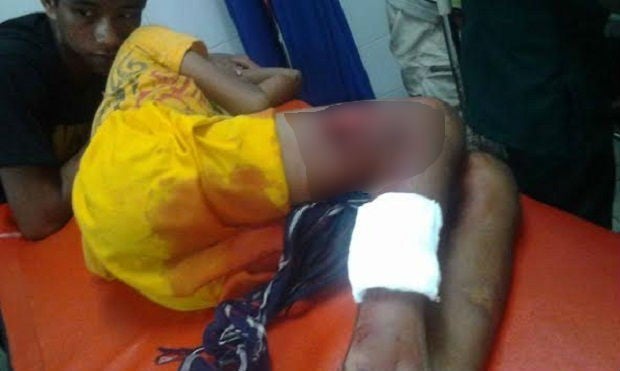 One of the alleged victims of strafing by Marine soldiers in Maimbung, Sulu during a pre-dawn incident Friday. Photo from Dr. Raden Ikbala’s Facebook page

The military has not yet commented on the allegation.

Dr. Raden Ikbala of the Integrated Provincial Health Office in Sulu said in a post on his Facebook page that the said incident took place in Barangay (village) Matatal around 12:15 a.m., following an earlier grenade attack on a Marine detachment there.

Ikbala did not identify the victims, who were rushed to a hospital. However, he said that they were aged 8, 10 and 12.

He said that during the grenade attack, the Marine soldiers retaliated but did not hit any of the armed men.

“People scampered for safety at the gym. When the Marines stopped firing, the residents went home,” Ikbala said.

About 30 minutes later, Ikbala said the firing resumed and residents reported that it came from the Marine soldiers in the village.

As a result, the three children were hit, he said. RAM