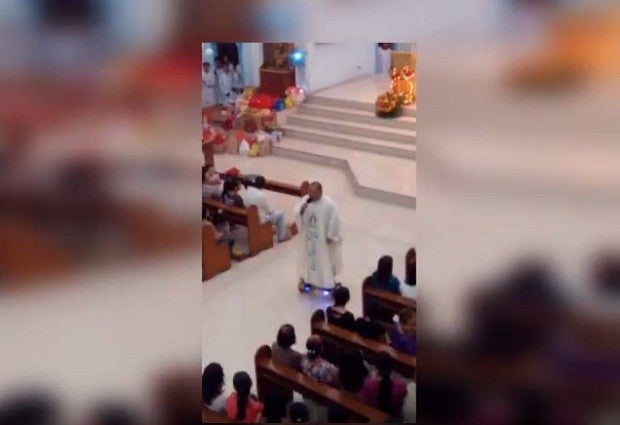 SAN PEDRO CITY, Philippines—The priest of Biñan City in Laguna province, who drew flak for singing shortly after Mass while riding a hoverboard, said he was “sorry” for the misunderstanding over his action.

Fr. Albert San Jose, parish priest of Our lady of Miraculous Medal Parish in the City of Biñan, told the Inquirer that he had asked Laguna Bishop Buenaventura M. Famadico for some days off to avoid further misunderstanding resulting from his singing at the Christmas Eve Mass.

San Jose thanked Bishop Famadico for giving him pastoral guidance on the issue. The priest said that the bishop had not suspended him and that it was he who had asked for some time off from parish duties.

San Jose said he was apologizing to those who misinterpreted his singing on a hoverboard just after concluding the Mass to greet people on Christmas Eve.

A hoverboard is a battery-operated device that brings a person from one point to another has now been banned on airlines in the Philippines because of safety concerns. Hoverboards first appeared in the 1989 science-fiction film “Back to the Future II.”

The priest said what he did was to use his singing talent and creativity to further enhance the atmosphere of joy and excitement in greeting the Lord on his birthday during the culmination of the Mass.

“My intention was not to show disrespect for the Holy Mass but to enhance it using my talent of singing,” San Jose said.

San Jose was caught on camera gliding around the aisles of the parish church in Ireneville Subdivision, on a hoverboard, holding a microphone and singing. The video has since gone viral.

A former weekly champion of ABS-CBN’s “Singing Bee” program hosted by movie actor Cesar Montano, San Jose said his intention was not to desecrate the Holy Mass but to invite people to rejoice at the coming of the Messiah and Savior of the world.

However, the official statement from the Laguna Diocese said that what San Jose did “was wrong” because the “Eucharist demands utmost respect and reverence. It is the source and summit of Christian life. It is the Church’s highest form of worship.”

“Consequently, it is not a personal celebration where one can capriciously introduce something to get the attention of the people,” it said.

The diocese said San Jose acknowledged that his action was not right and promised that it would not happen again.

“He will be out of the parish and will spend some time to reflect on this past event. He would like to apologize for what happened,” it added.

In the statement, the priest said the mistake he committed was a “wake-up call for him.”

“You can innovate, you can be creative, but your creativity has its limitations. What is important here is the homily, so if you will celebrate Mass, you should keep it as solemn as possible,” he said.

Secillano added that it was not necessary for the priest to walk from the altar to the back of the church because he would still be heard since a microphone and sound system were available in the church.  With a report from Tina G. Santos