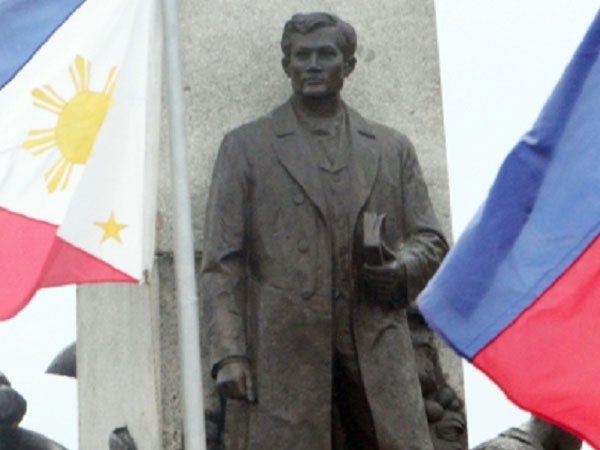 Noting that the nation celebrates Rizal Day each year to “reflect on the sacrifice of Dr. Jose Rizal to free our country from the shackles of abuse and inequality,” President Aquino will lead today’s flag-raising ceremonies to commemorate the 119th death anniversary of the national hero at the Rizal Park in Manila.

Dec. 30 marks the execution of Rizal by the Spanish colonizers at the 140-hectare park, also known as Luneta.

In a message, the President said that through the hero’s writings and deeds, “our forefathers became a braver, more united citizenry—both capable and determined to win the liberties we now enjoy.”

Rizal’s works “remain relevant to this day, a reminder of a past when freedom seemed beyond our reach,” Mr. Aquino said.

“Let us remember him on this occasion, along with other heroes who shared their strength and vision to make the Philippines the nation it is today.”

Mr. Aquino asked Filipinos to “be heroes in our own way, and reaffirm our commitment to the Daang Matuwid.”

“Only by traversing this road toward fairness and progress can we translate our dreams into tangible realities for our people,” he added.

Malacañang said that for the last time during his term, the President will lead the flag-raising rites to mark Rizal’s death anniversary.

In a statement, the Palace said “this year, he will continue his tradition of recognizing Rizal’s achievements, which serve as inspiration to all Filipinos to aspire for excellence.”

“And during a season where we consider the many ways by which we can improve ourselves and the lives of those around us, the President … wishes to remind the Filipino people of the values that tie us together, and of the work that needs to be done to continue our nation’s progress along the Straight Path,” Lacierda added. Jerry E. Esplanada