A night for remembering LJM 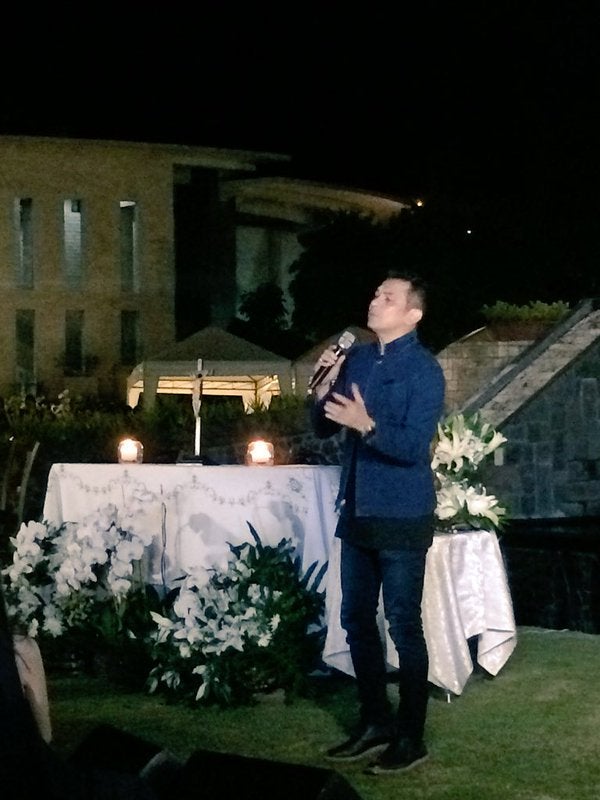 The air was heavy with memory on Monday night and a rare Christmas full moon showered light on close colleagues and friends of Letty Jimenez-Magsanoc who paid tribute to the esteemed editor in chief of the Philippine Daily Inquirer.

At the Heritage Memorial Park in Taguig City, the roaring of jet engines of airplanes taking off from nearby Manila International Airport occasionally interrupted the outpouring of memories on the second night of Magsanoc’s wake. After a brief pause—a moment of waiting—mourners carried on with the night of remembering.

It is said that remembering only comes after older memories have given away and more recent ones take over. It is precisely this that loved ones of Magsanoc, whom they fondly called LJM, seek to dispel, by memorializing moments into eulogies, transcending memory and time.

The number of years working with LJM instilled in senior reporter Nancy Carvajal the perpetual presence of LJM as a mentor. Her work as LJM’s assistant for 14 years before becoming a reporter meant to her that the esteemed editor’s wisdom had become part of hers, even after LJM’s passing.

In her eulogy for LJM, Carvajal said every day of those 14 years were spent talking. She had another moniker for LJM: “Talets” for “Tita Letty.” Her role as assistant earned Carvajal the title “LJM’s gatekeeper.”

“For 14 years, almost every day we talked to each other,” Carvajal said. “I was the gatekeeper of Tita Letty.”

Magsanoc’s secretary for over a decade said much had been said of how LJM nurtured reporters. But more can be said of her concern for the other Inquirer employees, said Carvajal, who related that almost everyone received a personalized dedication from LJM at Christmas. This year, the greetings did not come after the esteemed editor succumbed to heart attack on Christmas eve.

“There was a wedding of an editorial assistant at 6 a.m. in Silang, Cavite, she went there. That’s how Tita Letty showed her love to the Inquirer employees… Almost everyone received a personalized dedication from Mrs. Magsanoc… There was a time almost every week reporters were getting married, and she did not say no to any invitation,” Carvajal said.

With the blessing of LJM, Carvajal was given the privilege to pursue the Inquirer’s expose on the pork barrel scandal. Magsanoc called the story “the grand dame of Inquirer scoops” — which became Carvajal’s first big break.

Carvajal recounted the arduous time she spent with the whistleblowers and the recalled the advice of LJM to continue supporting the witnesses. Carvajal was a National Bureau of Investigation reporter when she covered what seemed to be a simple rescue operation of a kidnap victim, Benhur Luy.

Luy would later reveal that the illegal detention was part of a plot to silence him from exposing what he knew about the scheme to siphon legislators’ funds into ghost projects in exchange for kickbacks. The alleged mastermind was his employer Janet Napoles.

Amid the pressure of serving as witnesses against three senators and two former representatives, LJM urged the whistleblowers to hold on despite the threats, Carvajal said.

“In the Napoles story, she would always tell me, ‘Stay the course, Nancy. Please tell the whistleblowers to be steadfast. Just stay the course, and everything will be in place,’” Carvajal said.

The Inquirer’s expose and the subsequent government investigation and prosecution resulted in the Supreme Court’s scrapping of the pork barrel system amid protests and a public outcry — a classic case of journalism fulfilling its mandate of social mobilization.

According to reporter Tarra Quismondo’s last interview with LJM for the paper’s 30th year anniversary, LJM said: “It’s so rewarding, like in the pork barrel scam, you get people to jail. You know, these things I cannot explain. It’s a privilege for me to be in a job like this. You can make a difference, you can make change.”

Having gone through the challenge posed to her by LJM, Carvajal struggled to find words, burdened by the void of losing her long-time boss who entrusted her with a story of impact.

Nilo Paurom, Page One operations chief for the Inquirer, remembers best LJM’s insistence on publishing the iconic front page of the Inquirer during the Manny Pacquiao-Floyd Mayweather bout, knowing it could set a trend in Philippine publication.

The Inquirer dedicated the front page to a full-page photo of Pacquiao’s back with hands raised standing up on the railings despite his defeat. Paurom said LJM insisted what he then saw was unthinkable: putting a red arrow on Mayweather’s back, to direct attention to the faceless victor looking up from below.

“The whole concept was already revolutionary in Philippine media. It had never been done before. (Letty) wanted a front page that only contained the picture. Indeed, it came out very powerful. Then, Letty said out of the blue that she wanted a red arrow on Mayweather’s back. Lynett (Villariba) (the art and design director) and I protested, but to no avail. ‘Basta,’ LJM answered,” Paurom said.

“The next day, that little red arrow was the talk of the town.”

Paurom said LJM had a knack of always seeing a better picture and better story. She was also known as being “predictable… at being unpredictable.”

Paurom recalled a conversation with an artist who was under LJM’s tutelage before. Paurom found out that LJM wanted the artist to overhaul his work which he had been doing late in the night.

“He literally snapped his pencil and kicked the trash can which went flying across the room. But there was Letty cool as ever, saying she was unfazed and totally unimpressed by the midnight drama,” Paurom said of the conversation with the artist.

“After he calmed down, he went back to work and did exactly what Letty wanted him to do. What Letty wants, Letty gets,” he added.

“I was laughing the whole, so very Letty! I couldn’t resist imagining in our case how many Mongol pens we snapped in two, how many trash cans we kicked across the Inquirer news room in our minds!”

Despite this, LJM had always espoused what was best for the newspaper she was working for. In the Inquirer, LJM was “fiercely loyal and watches your back,” which only meant she needed others to watch her back, too, Paurom said.

“But Letty, for all her stubbornness, listens if you persist long enough and cite your reasons… With Letty, there is always a better photo, a better headline, a better story. It was a privilege working with Letty, who now joins the pantheon of the giants of Philippine media,” Paurom said.

“Tomorrow, we’ll go back to work. That we’d be missing Letty is a gross understatement. We will always remember that little red arrow.”

Inquirer columnist Ceres Doyo, who had worked for LJM when she was editor of the magazine Panorama, wanted to pass the serious past LJM led with that of the quirkier side of LJM.

Doyo in the 1980s wrote about the military’s hand in the murder of tribal chieftain Macli-ing Dulag for his critical stance on the construction of a dam in Kalinga. It was a time when the Marcos dictatorship stifled press freedom and equated critical journalism with subversion.

LJM published the story in Panorama, even though the magazine was owned by Marcos crony Hans Menzi. That resulted in a military interrogation on Doyo, then a human rights advocate, who years later would write about it in her column at the Inquirer in memorializing her friendship with LJM.

“You have nothing to hide. Your nonappearance would give the impression that you were less than ‘truthful.’ Also you—we—have a cause worth fighting for. You were there. You know that truth is on your side. Just tell the truth,” LJM wrote Doyo in a letter dated July 7, 1980, according to Doyo’s column.

READ:  ‘You–we–have cause that’s worth fighting for’

Magsanoc would later write about Doyo’s story in a column in the Panorama in 1981, in response to a Marcos presidential staff’s criticism of the story and the journalist behind it as irresponsible simply because her view was different from the authoritative version.

In the column, LJM espoused press freedom as responsibility and freedom hand in hand. She also criticized the dictator’s view of responsible journalists as mere propagandists of the state. She said only through a divergence of government view and contrarian positions can there emerge a society “stronger and united than ever.”

Magsanoc would later be fired from the Panorama after she wrote a scathing column about Marcos’ third inauguration as president that cemented a 16-year reign in 1981.

Doyo chose to write about this grim but historic moment in her life with LJM in her column instead of saying it in her eulogy. She shared the lighter side of Magsanoc as the ever-protective mother.

Doyo said LJM once sent a message to her intended for somebody else. It was a text message apparently implying that LJM had been checking up on her youngest son Martin, now a doctor.

“A year or so ago, I received a message from her which was not meant for me. It said: ‘Hi, were you able to see the girlfriend of Martin? What was she like?’” Doyo said, rousing laughter from the audience.

“I sent back her message and said, ‘Letty, is this message for me? It seems like it was not.’ And she texted back, ‘Haha, you caught me spying on my son!’” she added.

The incident caught a similar chord on Inquirer Lifestyle Editor Thelma Sioson-San Juan, who in her eulogy jokingly said that LJM was an “investigative mom.”

San Juan in her eulogy recounted that LJM, who usually was not fond of having pictures of her taken, asked her to snap her photos during the Apec dinner in November attended by economic leaders US President Barack Obama, Canada Prime Minister Justin Trudeau, to name a few.

Magsanoc broke protocol and approached Obama for a conversation. Obama supposedly told LJM that President Benigno Aquino III had mentioned her to him.

San Juan said LJM would later have pictures in the garden, with her red wine in hand, even with the customized tables and chairs she liked. She even asked San Juan to have an autograph with Mexican President Enrique Nieto, dubbed by netizens as an APEC hottie.

San Juan was able to take a picture of LJM photobombing the heart throb Nieto. “She’s there behind Nieto. She wanted to get an autograph of Nieto. I told her, ‘Huwag na, nakakahiya na masyado.’”

Using a projector, San Juan flashed a few of LJM’s digitally-scanned pictures during the Apec — a timeless memory immortalized in still images. Free from the pitfall of decay, the digital memory transcended time. Looking through LJM’s poses, San Juan pondered how much life she still had even after her passing.