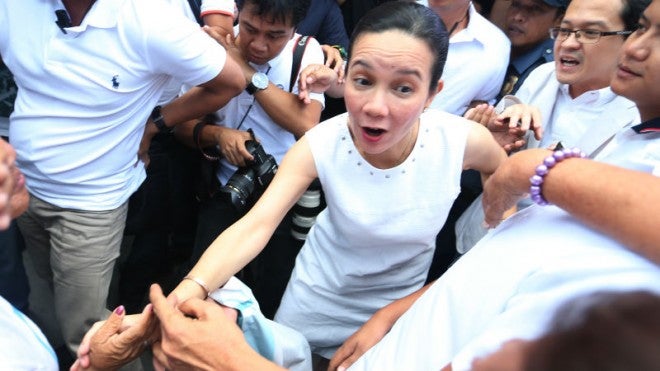 Senator Grace Poe on Tuesday moved for the inhibition of three Associate Justices of the Supreme Court who unanimously voted for her disqualification as a Senator.

In his dissenting opinion, Brion said there is no evidence existed to show that Poe is a natural-born citizen, one of the major requirements for an aspirant to be allowed to run for President.

Carpio and De Castro, on the other hand, believed that while Poe is a Filipino citizen, she is not natural born because she acquired her nationality by legal fiction.

“In all of these Resolutions, the Comelec pronounced that herein petitioner lacked the qualification of natural-born citizenship required to be president. Hence, herein movant respectfully moves that Justices Carpio, De Castro and Brion inhibit themselves on the ground of prejudgment given their position in the SET case that Sen. Poe is not a natural-born Filipino,” the motion for inhibition stated.

“A further reason for inhibition in these petitions is the non-participation of said justices in G.R. No. 221538 (petition filed by Rizalito David questioning the SET ruling). Indeed, ‘prior inhibition’ in related cases is an acceptable reason to decline participation in a case,” the motion further stated.

On the other hand, they have also filed another motion seeking to consolidate her two petitions questioning the two Comelec ruling that affirmed the ruling of both its First and Second Divisions allowing the cancellation of Poe’s COC and the petition filed by David against SET.

The high court has also set an oral argument on Jan. 19 for all the three cases, including that questioned the Comelec en banc’s decision and the SET ruling.