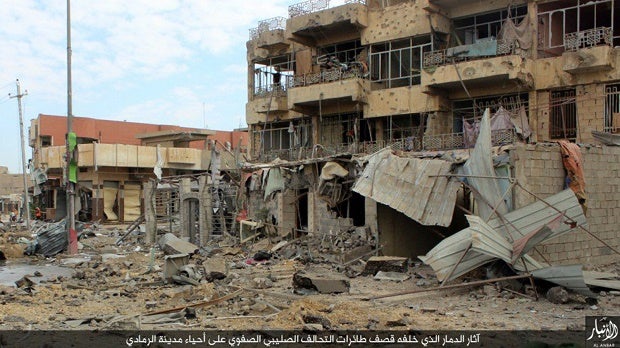 This image posted online Sunday, Dec. 27, 2015, by supporters of the Islamic State of Iraq and Syria (ISIS) militant group on an anonymous photo sharing website, shows heavy damage in Ramadi, Iraq, a day before Iraqi forces backed by U.S.-led airstrikes, re-took the government complex in the center of the city after militants captured it in May. The photo bears the watermark of ISIS media releases and is consistent with other AP reporting. The Arabic caption on the photo reads, “Damages from airstrikes in Ramadi militant photo via AP

RAMADI, Iraq—Iraq declared the city of Ramadi liberated from the Islamic State of Iraq and Syria (ISIS) group Monday and raised the national flag over its government complex after clinching a landmark victory against the jihadists.

Fighters brandishing rifles danced in the Anbar provincial capital as top commanders paraded through the streets after recapturing the city lost to ISIS in May.

Pockets of jihadists may remain but the army said it no longer faced any resistance and that its main task was to defuse countless bombs and traps.

“Ramadi has been liberated and the armed forces of the counter-terrorism service have raised the Iraqi flag above the government complex,” Brigadier General Yahya Rasool said on television.

The former government headquarters in Ramadi was the epicentre of the fighting but Iraqi forces did not rush in when ISIS pulled out.

“Daesh has planted more than 300 explosive devices on the roads and in the buildings of the government complex,” said Brigadier General Majid al-Fatlawi of the army’s 8th division.

Officials said ISIS used civilians as human shields to escape the battle when it became clear their last stand in Ramadi was doomed.

A senior army commander said his forces were sweeping the outskirts of the city for potential pockets of jihadists.

ISIS had an estimated force of about 400 fighters to defend central Ramadi a week ago. It is unclear how many were killed and how many were able to pull back.

Iraq has not divulged any casualty figures for federal forces but medics said close to 100 government fighters were brought to Baghdad hospitals on Sunday alone.

“The dead bodies are taken directly to the main military hospital” near the airport, said one hospital source, explaining why he could not provide a death toll.

The US-led anti- ISIS coalition hailed the Iraqi forces for retaking Ramadi, an operation in which it played a significant role, training local forces, arming them and carrying out what it said were 600 air strikes since July.

The United States praised their “tremendous perseverance” while Britain said ISIS was driven out with support from its air force.

General Lloyd Austin, head of US Central Command which is overseeing the US role in the campaign, said Ramadi’s fall “clearly demonstrates that the enemy is losing momentum as they steadily cede territory.”

French President Francois Hollande called the liberation of Ramadi the “most important victory yet” in the fight against the jihadists.

Germany’s Foreign Minister Frank-Walter Steinmeier said “it shows once again that ISIS is not unbeatable.”

The jihadists’ loss of Ramadi came on the heels of the recapture in neighbouring Syria of a key dam on the Euphrates by an alliance of Kurdish and Arab rebels.

Iraqi Prime Minister Haider al-Abadi congratulated the fighters who retook Ramadi, vowing to liberate the second city of Mosul and rid the entire country of IS in 2016.

“We are coming to liberate Mosul, which will be the fatal blow to Daesh,” he said in a televised address.

Anbar residents account for more than a third of the 3.2 million Iraqis who have been displaced by conflict since the start of 2014.

Ramadi is devastated and a return to normalcy is some way away.

Sohaib Ali, 27, fled with his three children and the rest of his family to the capital of the autonomous Kurdish region Arbil nearly two years ago when violence first hit Ramadi.

“We do not intend to return for now, although this liberation makes us very happy. We can see that huge damage was caused in the city and I don’t think that basic services will return for a while, nor will security,” he said.

Defence Minister Khaled al-Obeidi said a week ago that Iraqi forces had reconquered more than half of the territory lost to IS in June and August 2014.

The victory in Ramadi follows others in Baiji, north of Baghdad, and Sinjar, the hub of the Yazidi minority in the northeast of the country.

Ramadi was recaptured by federal forces, with the Popular Mobilisation—a paramilitary force dominated by Tehran-backed Shiite militia groups—remaining on the fringes.

Many of Prime Minister Haider al-Abadi’s political rivals had questioned his strategy of excluding those groups and relying on the US-led coalition’s air power.

“As an institution, it’s the first time since the Daesh invasion (in June 2014) it has achieved a victory without the support of the Popular Mobilisation force.”