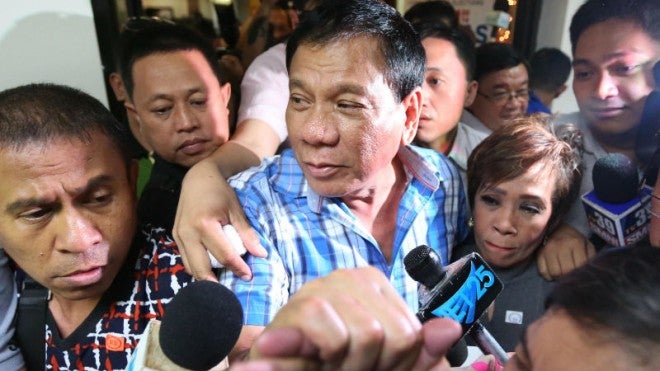 DAVAO CITY—Expect the return of the death penalty and the public hanging of convicted criminals in three to six months if Mayor Rodrigo Duterte is elected President.

“Drug addiction is easy money. Once you get it, it’s a done deal, you’re already into eternal addiction. I will not hesitate to use the military and the police and maybe, exercise the extraordinary power of the President to stop it,” he said in his regular Sunday TV talk show.

“I will recommend to Congress the restoration of death penalty by hanging in public,” Duterte said.

He said in his TV show that the drug problem had become a major threat to national security.

Duterte also said he would propose to Congress the creation of special criminal courts to try drug cases and to repeal the Juvenile Justice and Welfare Act of 2006, the law that protects the rights of minors in conflict with the law, which former Sen. Francisco Pangilinan authored.

“It has not helped the country at all and instead promoted criminality,” Duterte said. Under the law, he said, minors escape liability, even for capital offenses.

“The impunity that human rights groups are so concerned about,” Duterte said, concerned young criminals. He said the Pangilinan law “actually ushered in a new generation of criminals.”

Upon election as President, he said, “in three to six months, everything has to stop … corruption, drug abuse, criminality.”

“You are oppressing the Filipinos, and I hate it,” Duterte said. “If you don’t like my style because it sounds dictatorial, then, vote for (Sen. Grace) Poe, (Vice President Jejomar) Binay, (Sen. Miriam Defensor-) Santiago, forget all about me,” he said.

In some places in the country, the drug menace is already so bad that people are paying for it, no longer with cash, but with their goats and livestock.

“There’s always a right time for the right reason, if it’s my fate to become president, it would be the right time to stop these things,” he said.

The 70-year-old mayor said he is ambivalent about winning or losing in the upcoming elections. He said that if he loses, he would retire to private life, since his daughter former Sara Duterte will already sit as mayor. If he wins, he will have to spend most of his time out of Davao city.

“Maybe this is the last time that I will address you as mayor of  the city, it will no longer be the same again,” Duterte repeated what he had told his constituents in his Christmas address.

“Maybe, we’ll meet again, but I could no longer be mayor again,” he said.

The mayor also said that Davao City posted zero casualty in the Christmas revelry because of the local government’s political will to impose the firecracker ban to ensure public safety.

In launching his campaign for the presidency on Nov. 30, Duterte admitted condoning the extrajudicial execution of criminals and drug dealers, drawing concern from human rights groups and civil libertarians.