In final year, Obama seeks to stave off lame-duck status 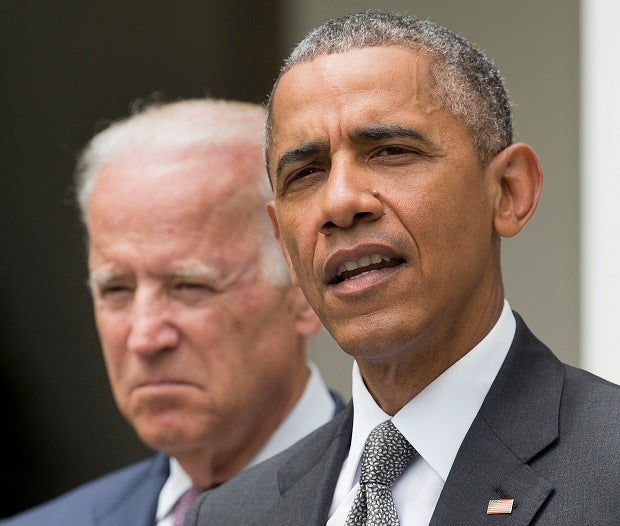 In this June 25, 2015 file photo, President Barack Obama, accompanied by Vice President Joe Biden, speaks in the Rose Garden of the White House, after the U.S. Supreme Court upheld the subsidies for customers in states that do not operate their own exchanges under President Barack Obama’s Affordable Care Act. The president is now staring down 11 months before his successor is chosen in an election shaping up to be a referendum on his leadership at home and abroad. He stirs deep anger among many Republicans, a constant reminder of his failure to make good on campaign promises to heal Washingtons divisiveness. But he remains popular among Democrats and foresees a role campaigning for his partys nominee in the general election. AP File Photo

WASHINGTON, United States—In June, during one of the best stretches of his presidency, Barack Obama strode through a West Wing hallway exclaiming, “Offense! Stay on offense!”

It was a rallying cry for a White House that suddenly seemed to find its footing in the final quarter of Obama’s tenure. An Asia-Pacific trade agreement was moving forward, as was the diplomatic opening with Cuba and work on an historic nuclear accord with Iran. The Supreme Court upheld a key part of the president’s long-embattled health care law and legalized gay marriage nationwide. Even in the depths of tragedy following a church shooting in Charleston, South Carolina, the president struck an emotional chord with his stirring eulogy for the victims.

“I said at the beginning of this year that interesting stuff happens in the fourth quarter—and we are only halfway through,” Obama said during his annual year-end news conference.

But the seventh year of Obama’s presidency also challenged anew his cautious and restrained approach to international crises, particularly in the Middle East. Attacks in Paris and San Bernardino, California, heightened fears of terror on American soil and Obama’s attempts to reassure Americans fell flat. And a seemingly endless string of mass shootings elsewhere in the U.S. exposed the sharp limits of Obama’s power to implement the gun control measures he advocates with passion.

READ: California attack is latest in deadly US mass shootings

Obama now stares down 11 months before his successor is chosen in an election shaping up to be a referendum on his leadership at home and abroad. He stirs deep anger among many Republicans, a constant reminder of his failure to make good on campaign promises to heal Washington’s divisiveness. But he remains popular among Democrats and foresees a role campaigning for his party’s nominee in the general election.

The president is packing his final year with foreign travel and has about a half-dozen trips abroad planned, including a likely visit to Cuba. The White House’s legislative agenda is slim and centers mostly on areas where he already has overlapping priorities with Republicans, including final passage of the Trans-Pacific Partnership trade pact and criminal justice reform. But he’s also eyeing provocative executive actions, including an expansion of background checks for gun purchases and the closure of the Guantanamo Bay detention center.

At times, Obama’s second term has appeared to play out in reverse.

He struggled to capitalize on his decisive re-election victory in 2012, stumbling through a two-year stretch that exposed the limits of his power and made him a political liability for his party. Then in an unexpected twist, his party’s devastating defeats in the 2014 midterm election spurred one of the most productive years of his presidency, positioning Obama to be a valuable political ally for Democratic presidential front-runner Hillary Clinton.

“Barack Obama will loom over the election,” said Dan Pfeiffer, a longtime Obama adviser who left the White House earlier this year.

Advisers say the Supreme Court’s ruling in May, which upheld the subsidies at the heart of Obama’s health care law, came as a particular relief to the president. The decision ensures the law survives his presidency, even as Republican candidates campaign on pledges to repeal it.

Obama sees the Iran nuclear accord, Pacific Rim trade pact and the sweeping global climate change agreement finalized in Paris earlier this month as examples of how America should wield its power on the world stage. The agreements have driven the debate in the presidential campaign for long stretches— a point of pride for a White House eager to show that the president remains the country’s most relevant politician even as he eyes the exits.

Yet Obama hasn’t been able to escape the Middle East. No matter how many times he tries to pivot to Asia or rebrand U.S. foreign policy as more about diplomacy than military might, the volatile region continues to be the dominant force in the way his foreign policy is viewed.

Nearly every candidate running for president—including Clinton, his former secretary of state—is calling for more aggressive action to fight the Islamic State group. Obama has inched the military deeper into the conflict, including backtracking on his refusal to put U.S. troops on the ground in Syria, but has largely stuck with his initial strategy of combating the extremist group from the air.

The terror attacks in Paris and California, however, have taken a worrying but distant fight against the Islamic State militants and made it top-of-mind for many Americans. White House advisers say Obama is well aware that he misjudged the public’s level of anxiety about terrorism and must scramble to counter what he sees as overheated rhetoric from Republican presidential candidates that filled the void he created by his tepid initial response.

Aides say outlining an alternative to Republicans on foreign policy and other matters will be a central part of his final State of the Union address to Congress on Jan. 12. The address was purposely scheduled earlier than usual to give the president space to make his case before primary voting begins. He departed for his annual Hawaii vacation with a draft of the speech in hand.

As he closed out 2015, Obama promised he wouldn’t fade into the background in his final year in office. But he’s also realistic about the limited legislative opportunities for a Democratic president and Republican-led Congress in a presidential election year.

At least some Republicans say they’re willing to work with the president in his final year.

“I think if you look at what we’ve been able to work with him on this year, it’s a good, telling piece of the kinds of things we can do next year,” said Republican Sen. Cory Gardner. “We worked very well on education reform, the highway bill, on human trafficking legislation—so there were some significant bipartisan accomplishments that we have been able to achieve this year.”

Of course, Obama’s legacy will be determined far more by the outcome of the presidential campaign than his 2016 legislative agenda. Since many of his most prominent moves have been the result of executive actions, a Republican president could largely wipe them away, while a Democrat is more likely to keep them in place and perhaps even expand on them.

White House aides say the president is eager to be on the campaign trail for the party’s nominee, as well as Democrats in other races. He chafed at being kept on the sidelines in the 2014 midterms, and advisers used Democrats’ sweeping losses in that campaign as an I-told-you-so moment for party officials.

This time, Obama isn’t waiting for an invitation from the Democratic nominee to make his campaign plans.

“I will have a Democratic successor, and I will campaign very hard to make that happen,” he said.