Ramos pays tribute to an ‘icon of Edsa’ 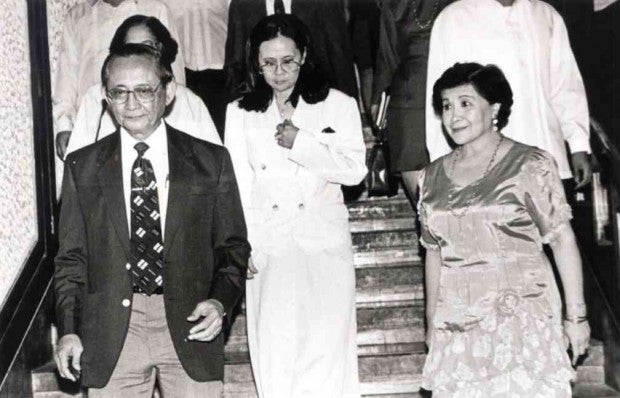 “AN ICON of (the) Edsa” People Power Revolution.

This was how former President Fidel V. Ramos, himself an icon of the 1986 Edsa Revolution, described the legacy of Inquirer editor in chief Letty Jimenez-Magsanoc, who passed away on Christmas Eve.

In a surprise visit to the Inquirer editorial office Saturday, Ramos hand-carried mementos and a letter of condolence to Magsanoc’s bereaved family.

“May you receive consolation from the fact that she not only lived a full and meaningful life, but also did her more substantial share in the service of God, country and people,” Ramos said in the letter.

In an interview, Ramos re called his close but below the radar engagement with Magsanoc, who, along with former Inquirer columnists Belinda Olivares-Cunanan and Ninez Cacho-Olivares, currently the publisher and editor in chief of The Tribune, fought the Marcos dictatorship through the power of the pen.

Magsanoc became editor in chief in 1991, after she was personally handpicked by Eggie Apostol of the Inquirer to take the helm of the paper that she had founded in 1985 as part of the “mosquito press,” publications highly critical of the Marcos regime.

The Mr. & Ms. Special Edition was one such paper, where Apostol and Magsanoc worked together, shortly before the Edsa Revolution in 1986 that brought the Marcos conjugal dictatorship to its knees.

“During martial law, [Magsanoc was among the] three [women] who were all in the media [and] who were very aggressive against the government,” Ramos recalled.

His clandestine but sustained engagement with the three “very aggressive and brave women” occurred from 1983 to 1986 following the assassination of opposition Sen. Benigno “Ninoy” Aquino Jr., the father of President Aquino, Ramos said.

The three courageous women were his bodyguards, he said in jest.

“I was their contact because I was the guy they could approach, and we would meet at various places [including] my church, the Cosmopolitan (Methodist) Church on Taft Avenue” in Manila, recalled Ramos, a Protestant.

Inadvertently, the former PC chief admitted to being Magsanoc’s “Deep Throat” in the Marcos establishment during those heady days.

Asked what sort of information he had given to Magsanoc, Ramos said: “[That would be] based on [her] questions.”

“[Magsanoc] was part of that group sympathetic to Cory Aquino when [Ninoy] was assassinated,” Ramos said, referring to the widow of the slain senator who was catapulted to the presidency in 1986.

Cory Aquino would later endorse the presidential candidacy of Ramos in 1992. Ramos’ sister, Leticia Ramos-Shahani, ran on the Cory Aquino ticket in the 1987 senatorial race.

“It is more than press freedom because freedom of information encompasses the citizenry to which [it is an entitlement]… press freedom is a human right,” Ramos said, quickly adding, “Letty is an icon of Edsa.”

Once passed, the FOI bill would allow greater public access to public documents, enhancing accountability and transparency in how the government works.

The measure was approved by the Senate in March 2014, but remains languishing in the administration-controlled House of Representatives despite President Aquino’s vow to prioritize the bill’s passage during his presidential campaign in 2010.

Ramos, who was seated during the Inquirer interview at the newsroom’s iconic round table next to Magsanoc’s working desk, declined to sit on the late editor’s chair when asked by the paper’s photographer for a shot.

“You might employ me! I’m only good as assistant janitor,” he said.

The former President noted Magsanoc’s deep “network of sources” during martial law. “I was one of them,” he said, adding that it was the family of Magsanoc that he had closer ties with.

Magsanoc’s father, the late Col. Nicanor Jimenez, was a guerrilla in Bataan during the Japanese occupation and a fighter in the Korean War in the early 1950s. He later became Philippine ambassador to Korea.

Jimenez, Ramos said, was secretary of the General Staff of the Armed Forces of the Philippines’ General Headquarters in Camp Aguinaldo, Quezon City, from 1951 to 1955, about the same time that Ramos’ uncle, Col. Simeon Marcos-Valdez, was AFP comptroller.

Another common friend of Jimenez and Valdez was Col. Carmelo Barbero.

“The six Valdez daughters are my first cousins, and their childhood friends are the children of Nick Jimenez,” Ramos said.

The three colonels, who belong to the University of the Philippines’ Vanguards Batch of 1936, were “all Bataan veterans and very heroic figures in our armed forces,” said Ramos, who was then a lieutenant.

Ramos and his three superiors were part of the 7,500-strong Philippine Expeditionary Forces to Korea, which helped the United Nations’ contingent fight the communists in the Korean War (1950-1953).

Magsanoc had immense contributions to the nation’s long fight for the restoration and later the preservation of democracy, Ramos said.

Under the present administration, Magsanoc and the late Inquirer publisher Isagani Yambot also lent their voices to the growing public demand for the passage of the FOI bill in Congress, he said, adding that he is also supportive of the bill.

Ramos noted that it had been 30 years since “a million of us Filipinos gathered at Edsa in February 1986 to defend our democracy and freedom, and by so doing, bloodlessly ejected an abusive and plunderous dictatorial regime.”

He added: “But beyond that, do we really try to remember why that transcendent, God-inspired event happened? And do the younger ones, particularly those born after 1986, who make up a large percentage of our population today (and many of whom are now parents themselves), even understand why the Edsa People Power Revolution took place?” Ramos asked, as if to underscore how the task of nation-building continues, as Magsanoc had so passionately advocated through her lifelong engagement with press freedom.