Only LJM can say this to Duterte 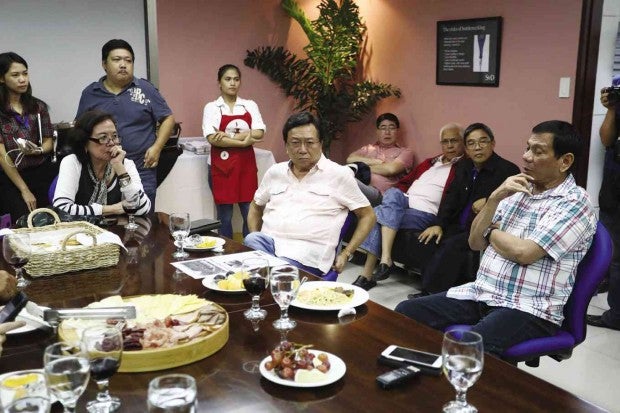 WHAT reporters and other editors would dare not ask politicians, Letty Jimenez-Magsanoc would shoot the questions without batting an eyelash, disarming if not pushing the interviewee to the right answers, as she did when Davao City Mayor Rodrigo Duterte visited the Inquirer on Aug. 25. Kimberly De la cruz

“I was waiting for you,” Davao City Mayor Rodrigo Duterte replied.

But the tough-talking mayor did not make any declaration that he was running for president when he visited the Inquirer main office late night of Aug. 25.

Duterte was surrounded by Inquirer editors and reporters when the editor in chief, after putting the newspaper to bed, entered the conference room.

Because the mayor was insisting that he was not running for president, Magsanoc—LJM to the Inquirer people—asked him why then was he in the Inquirer office.

“If you’re not running, why are you here with such a contingent?” Duterte came into the newsroom with at least 20 people.

When Duterte said that he was invited, LJM retorted: “With due respect, mayor, we did not invite you here.”

(Duterte’s visit to the Inquirer was arranged by his Manila-based supporters.)

The mayor stayed despite being told this. And, he stayed until 2 a.m.—discussing with the Inquirer editors and reporters everything under the sun, including what he thought of other presidential candidates, his molestation as a child, thoughts on federalism, his image as a killer, and what he would do if elected president.

The roundtable discussion ended with Duterte not admitting he was running.

Four months later, however, Duterte filed his certificate of candidacy for the post.

Four months later, LJM is no longer there to shoot the mayor with questions that only “The LJM” can dare ask.

“I willingly waited until she was through with her task way past midnight, because I have so much respect for her,” Duterte said.

“I was not surprised when she asked what my position is on the freedom of information bill considering her unyielding position to public accountability and transparency,” Duterte said. “Without batting an eyelash, I told her I am all for it.”

“If it is my destiny to serve in the position I have made myself available for, I will honor that commitment I made to her because I know she wanted it not for herself but for the country she committed all her life to.”

Duterte said it is the least he could do “for one whose sacrifices for the cause of press freedom and the struggles toward a better nation can never be fully appreciated,” referring to Magsanoc.

“Letty Jimenez-Magsanoc is no longer with us, but she left behind a wealth of memories and philosophies that can guide us as we try to collectively pick up from where she left off,” he said.

He called it his “misfortune” not to have known Magsanoc too well. “I will not add to that by reneging on the vow I made to her in the midnight of our nation’s history.”

He also said Magsanoc’s passing away ironically on Christmas eve “marks the end of an era.”

“She was one of the leading lights in the struggle for press freedom during the Marcos years,” he said. “She continued to be a fierce advocate of public accountability and transparency in the post-Edsa period down to her last breath.”

“Unlike other freedom fighters who succumbed to indifference and sometimes bitterness, she never lost her zest for life and optimism. Unlike many whose constant exposure to the harsh realities of a fallen world have pushed themselves to apathy, she continued to hope in the goodness of people,” Duterte said.

“And unlike others who have been thrust into a position of power, she shunned influence and privilege like the plague. I believe these are the reasons she remained credible until the end,” he added.

Read Next
44 stray bullet cases reported
EDITORS' PICK
Over 3 Million worth of prizes to be won at Smart Padala’s SENDali Manalo Promo!
Gear up and get ready to play with Yamaha Mio Gear
Acer starts the year off strong with the Aspire Vero National Geographic Edition
If elected VP, Sara Duterte will push for mandatory military service for all Filipinos
Senate bill seeks to penalize employers requiring employees to work during rest hours
Marcos-era elections: Not what his son signed up for
MOST READ
‘Sampal sa gobyerno:’ Drilon wants unvaxxed PAO chief barred from working
Vice mayor slams Vico Sotto for turning Pasig into a ‘puro palabas’ city
Bongbong-Sara tandem names 7 candidates in initial senatorial slate
Jose Manalo’s son Benj pays tribute to late mother: ‘You’re a testimony of God’s love’
Don't miss out on the latest news and information.