New wave of migrant children explain why they traveled solo 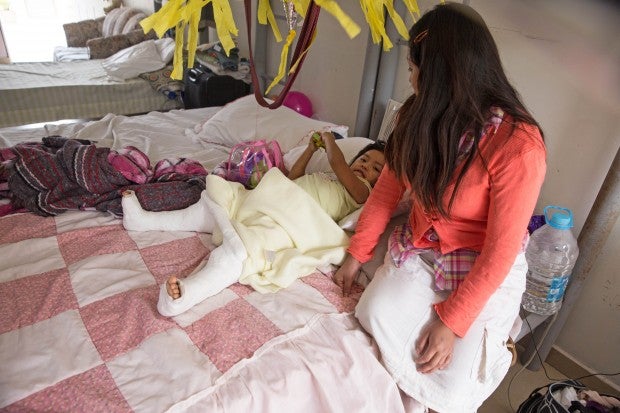 In this Dec. 15, 2015, photo, Marleny Gonzalez, right, looks at her 4-year-old daughter, Jenifer, at a shelter in Reynosa, Mexico, where they are living after trying to cross in to the United States. Gonzalez said her daughter suffered two broken legs when a truck they were traveling in overturned on the journey from Guatemala. Almost all my family is in the United States, Gonzalez said, including her daughters father. I felt alone,” she said. Given her daughters precarious state, she wasnt sure whether she would make the rest of the trip. AP

The youngest was 6, and he’d made the 2,000-mile (3,210-kilometer) journey from Honduras. Jon Smith Figueroa Acosta did not know where he was headed, but he had a phone number for his father in the United States.

It was unclear how long the group had been traveling together, or who had brought them across the Rio Grande. There were two teenage siblings whose mother had sent for them after their elderly grandmother in Honduras could no longer care for them, and two teenage Nicaraguans.

Luis Arias Dubon, 15, said the trip required that he walk through much of Mexico for nearly a month. He left Honduras when he was threatened by members of the deadly 18th Street gang.

“They tried to force me into the gang,” he said, adding that he was afraid they’d kill him.

The recent spike in the number of unaccompanied minors crossing the border brought U.S. Customs and Border Protection Commissioner R. Gil Kerlikowske to the Rio Grande Valley sector this month.

“Historically, the numbers would not be at the levels we see right now,” Kerlikowske said, standing in a warehouse where about 20 migrant children rested, wrapped in reflective plastic blankets. “The concerning part is, are we seeing the new normal?”

A total of 10,588 unaccompanied children crossed the U.S.-Mexico border in October and November, more than double the 5,129 who crossed during the same two months in 2014, federal statistics show. The number of family members crossing together, meanwhile, has nearly tripled, to 12,505.

Kerlikowske said his agency was better prepared to handle the influx than in summer 2014, when tens of thousands of unaccompanied children and families poured over the border.

Recently, two camps in North Texas have opened as shelters, housing 900 unaccompanied child migrants from countries that don’t border the U.S., who under federal law must be handed over to the Department of Health and Human Services within three days of being detained. A third facility is on the way, which will hold another 200. The children are being sent north to prevent a backlog at the border, health officials said.

The child migrants must be cared for until they can be united with a relative or sponsor, where they remain until immigration courts can decide on their cases.

Ester Franco, 38, of El Salvador, said she left with her two teenage daughters because they are of the age when local gang members start to accost young girls. She decided to bring them to Maryland, where her husband lives.

“I want them to be able to study,” she said.

The journey through Mexico can be dangerous.

Marleny Gonzalez, a 24-year-old Guatemalan, was in the bed of a pickup truck with other Central American migrants when it overturned two hours south of Reynosa, Mexico. Gonzalez wasn’t hurt, but her 4-year-old’s legs were broken. The child was in a cast covering the bottom half of her body.

“Almost all my family is in the United States,” Gonzalez, said, including her daughter’s father. “I felt alone.”

Given her daughter’s precarious state, she wasn’t sure now whether she would make the rest of the trip.