The grace behind Filipino gift-giving 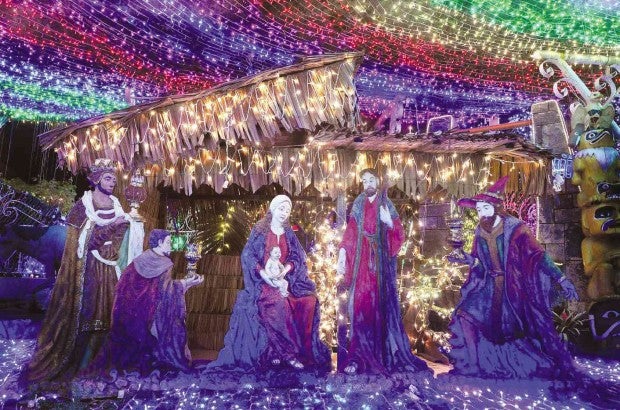 THE REASON FOR THE SEASON This magnificently lighted “belen” at the home of Alex Cruz in Filinvest East, Cainta, Rizal province, depicts the traditional scene at the birth of Jesus Christ. AUGUST DELA CRUZ

Four experts shared their thoughts on the psychology of gift-giving among Filipinos this holiday season.

Filipinos, according to sociologist Niño Tobias, have the propensity to be more generous, especially during Christmas.

“We want to make other people happy,” he said. This trait, which is primarily reflected by our hospitality culture, trickles down to how we celebrate the holiday season, he added.

“Hospitality is a way of sharing yourself with other people. We enjoy giving, that’s why Christmas in the Philippines is exaggerated. You see, even the poor will spend just so he can give,” said Tobias, a sociology professor at University of Santo Tomas.

Giving is also a Filipino’s “expression of love,” heightened during Christmas because Filipinos are predominantly Catholic and believe that they are celebrating the birth of Christ, who was God’s best gift to the world, explained Fr. Carmelo Arada Jr., an official of the Manila Archdiocese’s commission on liturgy.

Arada cited the earliest link between gift-giving and Christmas as the birth of Christ in a manger when the Three Wise Men, also known as the Three Kings, gave the Infant Jesus the best gifts they saw fit for a king: frankincense, gold and myrrh.

“Christmas gift-giving is special for Filipinos,” the priest said. “On other occasions, we call the gifts regalo. But during the Christmas season, the correct term for gifts becomes aguinaldo, which refers to the imitation of God’s grace. God gives us grace.”

And this divine link explains why Filipinos are “generous gift-givers,” Arada said.

Agreed Cid Terosa, vice dean of the University of Asia and the Pacific School of Economics: “Filipinos always aim for the best when they give. Most of the time, they give what their recipients value the most. We tend to please.”

Neuropsychologist Danilo Tuazon, who believes that human beings are naturally selfish, however explained that even without the spiritual aspect of Christmas, gift-giving has always been one of the five “expressions of emotions.”

The other four are touch, time, service and words of affirmation.

People in general give gifts because their brain is telling them to share what they have, Tuazon said. “This makes givers feel good about themselves.”

He explained: “Gift-giving is basically an expression of the brain…. To express your love you have to do something about it. Love has its own neuro pressure in the brain and no matter what, [love] must come out,” he added.

Ironically, the neuropsychologist said, despite everyone having emotions, not everyone wants to give or receive gifts.

“We all have different expressions of emotions,” Tuazon said. “The danger is when you give gifts to someone who does not feel comfortable receiving them. Not that the person is ungrateful or unappreciative. It’s just that his or her brain is not wired to understand gifts as a form of love.”

Because that recipient is not comfortable with the gift-giving, “the tendency is for that person to want to reciprocate immediately, or what we call kaliwaan (give and take),” he said.

“The recipient would now feel pressured to give you something back. Primarily because of pressure in Filipino society, (he or she) feel that it’s against good manners not to give back. This makes gift-giving not a form of love, but a form of business,” he added.

When a giver refuses to understand the real needs of recipients and how they express their emotions, misunderstanding may set in, Tuazon said.

The culture of utang na loob (debt of gratitude) also worsens the kaliwaan culture, Arada said. Filipinos tend to give the best gifts to people they are most grateful to, sometimes even when they cannot afford it.

Tuazon confirmed this. “When utang na loob sets in, the receiver thinks: he thought of me so I should think of something for him too. Or else, nakakahiya (it would be embarrassing). The word hiya (shame or loss of face) is [more] a social pressure than a neuro one.”

“That is wrong,” Arada said. “The concept should be to pay it forward, not to pay someone back.”

For Tobias, such a “reciprocal” approach could turn what used to be a “divine concept” of gift-giving into something materialistic, consumerist and opportunistic. The pressure to give something, he said, could slowly become ingrained in Filipino culture.

“There are expectations about those who have the capacity to provide and share. [The thinking becomes] ‘since you are more blessed, you’re supposed to share your blessings with other people.’ It’s a pressure among those who are required to give. So rather than lose face, they’d rather stay out of sight,” Tobias said, referring to the common practice among godparents to conveniently be out when their godchildren come calling.

The materialistic approach is evident as well in how parents and engaged couples choose their baptismal and wedding godparents, Tobias noted. Rather than choose people who can guide their spiritual growth, couples and parents now choose patrons based on their wealth, popularity and position.

“Why do you need 20 sets of godparents? Why choose your boss as a godparent? I’m not saying it has become a business, but [choice] has become material-based. The ninong and ninang now feel pressured to give something to their godchildren during Christmas,” he said, adding that giving is “both a strong point and a vulnerability among Filipinos.”

Indeed, Tuazon said, as time passes, the purpose behind gift-giving also changes, and has now evolved into a form of “investment.”

Among practical-minded Filipinos, gift-giving has become a strategy to get “better services and more doors opened for better opportunities, or [a means] to strengthen or maintain good relationships,” he added.

“Now, gift-giving has becomes tainted with politics because of the coming election. Some give because they want to receive something back,” Arada said.

Tobias noted that cultural transmission and cultural imperialism had also influenced Filipinos to become materialistic. The best proof of this, he said, is that most stores or even Filipino homes have Santa Claus—not Jesus Christ—as a symbol for Christmas.

“[People] used to personally buy gifts to give during Christmas. Now, they just give cash,” he noted.

Still, Tobias conceded. “We genuinely give from the heart and pocket. Unlike in First World countries where money is rather easy, Filipinos work hard for the money so it’s no joke when they decide to give cash,” he said.

For Terosa, spending to impress is not all bad, especially when since money spent during the holiday season boosts the country’s economy.

“In general, consumption spending is good for the economy. It has a multiplier effect because it also generates production. People don’t just spend more, people also earn more,” he said.

The good news is that people now have more purchasing power and more choices to choose from. The bad news is, with bigger demand, “things become a bit more expensive,” the economics professor added.

“The biggest consideration is income,” Terosa said. “It’s whether or not you have the amount needed to buy gifts for your loved ones. The main difference is planning. Those with steady income can plan, while those who don’t become impulsive buyers as soon as the money comes in. The thing is, impulse buying may not be worth your money.”

To give better gifts, Tobias said, “[We] can enhance the present with good values.”

Hopefully, Arada said, Filipinos would see that the real meaning of gift-giving as “a mirror of God’s generosity.”