Town prepared but no match to ‘Nona’ 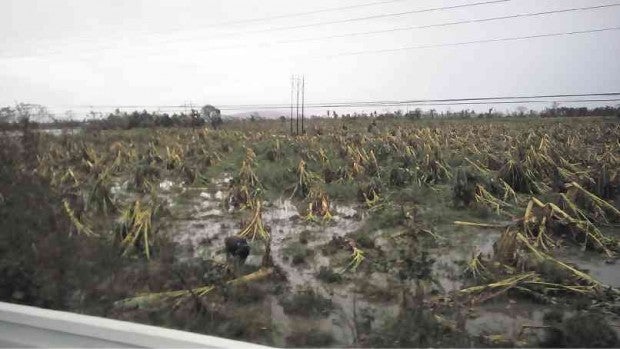 FALLEN banana plants litter the field near the Bucayao protection dike in Baco, Oriental Mindoro, in the aftermath of Typhoon “Nona” (international name: Melor) that hit the province on Dec. 15. Madonna T. Virola

WHEN an unusually strong wind and flood started battering the Baco town center in Oriental Mindoro province on Dec. 15, Mayor Rey Marco had to stay back in his car, but water rose fast to his waist.

“Then in just two minutes, when I (went out of) the car, the water was up to my chest. We’re used to floodings in the past but it’s double this time, to as high as half a meter (of) banlik (mud) and six feet of water, recalled the first-time politician.

Even if Marco, 62, had his house elevated because his mother developed trauma from flooding sometime ago, he and wife Menen had to sleep on their muddy bed for two nights. When they woke up, they would just don their boots.

Still, the mayor and his family counted themselves lucky.

“This is nothing compared to what others experienced. Several had their house, not just totally or partially damaged, but washed out,” he said.

Residents lamented on Facebook why the national media was not giving Baco (population: 35,000 as of 2010) an exposure, like the other typhoon-hit towns in the province.

Baco, a third-class municipality, the town next to the capital Calapan, about an hour ride on a private vehicle, has 27 barangays. The town produces bananas, coconut, palay, corn and fruits like lanzones, rambutan, durian, marang, coffee and cacao, among other things.

But the water that rushed from the upland barangays of Baras, Lantuyang, Bayanan and San Ignacio transformed Baco into a “mud” town. Felled trees made rescue and relief highly challenging.

“One hundred houses are washed out in Baras. Their hanging bridge was destroyed, so porters of relief goods have to walk two hours to (reach the village,” Marco said.

The municipal government considered Biso Amorado, 60, to be another typhoon fatality, saying his heart attack was also due to stress from Typhoon “Nona” (international name: Melor)

The latest report from the Baco local government unit (LGU) to Provincial Disaster Risk Reduction Management Council was that 2,423 households or 13,115 individuals have evacuated.

The LGU declared 100-percent damage to agriculture while the overall cost was still being calculated.

“Bananas will take two years to be rehabilitated,” Marco said.

“And I had added to the columns of the totally and partially damaged houses those that are totally washed out. (When) DSWD (Department of Social Welfare and Development) arrived, they could not take pictures of those totally washed out,” Marco said.

In Barangay Bayanan, the typhoon destroyed 80 houses and several of these residents opted to stay with relatives in other sitios rather than go to the evacuation centers. Many others used to live in small houses in lands they did not own.

The springwater system located in Barangay Mamangan 1 that supplied potable water to most of the town was covered with soil or had been washed away along with the water lines.

The Mangyan folk living in the mountains were displaced because their roofs made of banana leaves were washed out.

At the town proper, the parish church and convent, and the town hall were not spared.

At the mayor’s office, there was minimum light.

Marco and the municipal employees have centralized all LGU transactions here, like a “one-stop shop,” because the town hall, up to Dec. 22, a week after the typhoon slammed the town, was still muddied and dim.

Marco showed his handwritten notes, using columnar pads, to donors and explained how the LGU ensured fair distribution of goods.

He cautioned donors not to go directly to barangays unless coordinated with the mayor’s office.

“There might be no people, or there will be chaos, or people will get angry instead of being grateful (if distribution is not fair),” he said.

If a donor passes through the LGU, Marco said they could suggest what village they could go to that suited the amount and kind of donation they would provide.

“It’s better (that the donation or distributed goods) would go beyond the number (of affected families) rather than lacking,” said the mayor, citing the chaotic distribution in Barangay San Andres when the donor came with not enough to distribute to the 370 families affected in the area.

In ensuring that the goods reached the people, a councilor was made to sign the release of goods (on the mayor’s columnar pad) and was made accountable to the people, said Marco, who was apparently making use of his experience as an erstwhile auditor of the Commission on Audit.

The councilor assigned to a given area, along with a local coordinator, makes the rounds in the community when there are goods to distribute.

As of this writing, several private organizations have come to extend help to Baco residents, including those operated by major television networks and the Mormon church. The provincial government, DSWD and the Puerto Galera LGU also came with their assistance.

The DMCI power plant, Calapan Power, Calapan’s Holy Infant Academy and its alumni association gave away relief packs to Barangay Tabon-tabon. The Calapan fire station gave water and helped in the cleanup of the grounds.

While the LGU and residents are grateful for the help that are coming, much more is needed, they said.

Aside from food and water, and kerosene or gas for fuel, displaced residents are also in need of medicine for fever, cough and skin diseases resulting from walking through muddy soil.

There is also a need for boots and gerry cans to replace the water containers that were washed away.

Tents and clothes are especially needed for the Mangyan who lost their shelter.

According to Marco, they have ordered jetmatics pumps to be installed in free-flowing water areas to provide temporary potable water supply to residents.

Marco said they were preparing for Nona when the typhoon hit the town earlier than projected. When Nona came earlier and stronger than they expected, their preparations did not match, Marco said.

“Good that it hit daytime so people are awake and seeing what’s happening,” Marco said.

The mayor shared the story of the four children from one family that needed to be rescued from the roof of their house. One was rescued, but three others were stuck on the roof. Fortunately, an Army truck was stranded at the poblacion due to the flood. Without a rope to pull down the children, the soldiers used the line from the electric post to rescue the children.

“Imagine the trauma of the parents whose children were shouting for help,” Marco said.