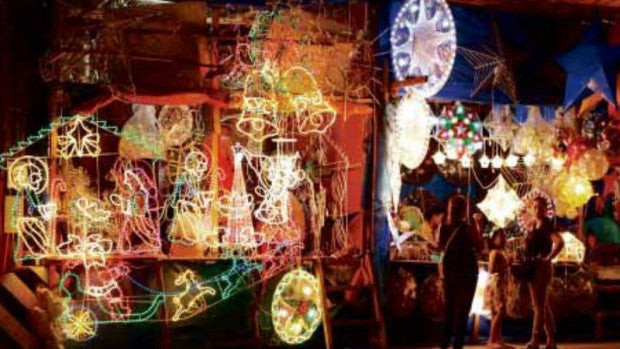 LIGHTS OF CHRISTMAS You can pick your choice. Shown above are the various Christmas lanterns sold along Ortigas Extension near Gilmore Avenue in Quezon City. LYN RILLON

THERE is one thoroughfare in Metro Manila where most motorists do not mind getting stalled in traffic around this time of the year.

In fact, when traffic eases up late at night, vehicles even deliberately slow down to give their passengers a chance to relish the sight of this wonderful display of Christmas lanterns with colorful, twinkling lights.

Welcome to Parol Row, a strip of road between Santolan Road and Valencia Street, that comes to life during the “ber” months. Here, Christmas lanterns of various sizes and colors are sold or repaired at the onset of the holiday season.

Located near the San Juan-Quezon City boundary, the lantern stalls occupy both sides of a street mistakenly referred to as Gilmore, which is actually still several meters away. Sometimes, the street is called Ortigas Avenue, but it is not because Ortigas ends at the corner of Santolan.

For the longest time, it was known as Granada Street, except that only those with businesses there knew that.

About five years ago, however, when Speaker Feliciano Belmonte Jr. was still the Quezon City mayor, that road was officially declared Sen. Jose O. Vera Street, although there is only one sign across a gas station that says so—and it is hardly visible. This must explain the still ongoing confusion.

Compared to other thoroughfares in the vicinity, this street is relatively new because it used to be a private property owned by the late Sen. Jose Olfindo Vera of Catanduanes province and his wife, the former Dolores Honrado of Albay province.

When Vera was still a judge and assigned to Manila, he and his family moved from house to house until they found what they wanted. They were always on the lookout for property development, preferably one close to a river since that was the wish of the patriarch.

In 1937, when Quezon City was still in the process of being carved out of Rizal province, Vera found a 4.5-hectare parcel of land off the then sleepy town of San Juan. There was no river. Instead, there was a rivulet (actually a San Juan River tributary) that cut through the newly acquired property.

Vera set up a house on the Valencia side for his family. Across the rivulet spanned by a wooden bridge, the family built the Sampaguita movie studio. (Sampaguita Pictures, then one of the biggest film companies, was established by the Vera clan, along with several other investors.)

Beyond the Vera estate was Delgado Hills that stretched all the way to the corner of Santolan, where for the longest time stood a Persian restaurant. (It is now a salon and spa).

Other present-day establishments in the area are Savory, several small Chinese restaurants and a row of stores selling lighting fixtures.

Delgado Hills, a forested area with a sloping terrain, was often used by the film studio as setting for movies that needed rural or jungle scenes. It is now occupied by the Gilmore townhouses.

Nearby, on the Santolan side going to Pinaglabanan Street, was Madrigal property and across that was Ortigas territory, the future site of Greenhills (the subdivisions and the commercial center).

By late 1950s, the metropolis already saw the need to have another gateway to Quezon City. Access to the then Philippine capital was limited, especially if one was headed to New Manila and was coming from Mandaluyong and Pasig.

There were only three options then: 1) Snake through the narrow labyrinth that was (still is) P. Guevara; 2) Take Ortigas and go to M. Paterno, which wouldn’t have been wide enough to take in the growing number of vehicles, especially today; 3) Go to Highway 54 (today’s Edsa) and fervently pray you don’t get ambushed by bandits reportedly hiding behind the cogon wilderness, before making a left on P. Tuazon.

Cutting across the eastern side of the Vera property was ideal because that would lead to Gilmore, past N. Domingo and onto Aurora Boulevard.

That new route, however, soon disrupted business at Sampaguita Pictures. For one, its iconic studio gate (with the arch) faced Valencia Street, where it looked imposing.

With the changes, the film company had to make do with a less impressive facade.

It was the late Quezon City Mayor Norberto Amoranto who convinced the Vera family to give up a portion of their land. Being civic-minded people, they agreed to part with one hectare and sell it to the Quezon City government for a very minimal amount.

The new road eventually made life easier for motorists.

Today, in spite of the congestion, that is still the best route for those headed to Greenhills and Megamall, coming from New Manila and Roces and Tomas Morato Avenues.

Truthfully, it was the truck ban in Manila that worsened the traffic along that route, no thanks to the container vans that are now forced to pass there to get around Mayor Joseph Estrada’s ordinance.

That road, however, was a piece of culinary heaven, especially in the 1970s and ‘80s when it became home to some of the best restaurants of the era.

There was Josephine Restaurant and its legendary seafood fare. Nearby was Choo-choo Junction built to look like a train, with mouth-watering spaghetti topped with sunny side up eggs on its menu.

Those craving for desserts went to La Chesca, right outside the Villa Ortigas townhouse. La Chesca succeeded in coming up with a Filipino version of fruitcake. Instead of the usual glazed fruit, the bakeshop used candied jackfruit strips.

For fine dining, there was Casa Marcos, famous for its steaks, that also had a kiosk outside the restaurant selling pan de sal that was crusty on the outside, but soft and moist inside.

When Casa Marcos stopped operating in the early 1990s, Max’s Restaurant took over the site at the corner of Valencia and Granada. But before it even became a landmark in that part of the city, a Petron gas station had displaced “The House That Fried Chicken Built.”

Set up starting September (a few stay all year-round, selling capiz products), some motorists now point to these stores as the cause of traffic congestion in the area.

To be fair, the parol vendors have their own traffic aide —complete with a whistle—to assist clients with vehicles to clear the strip.

Unfortunately, the traffic is bad most everywhere in Metro Manila. And if people are going to get stuck in traffic anyway, they may as well be entertained.