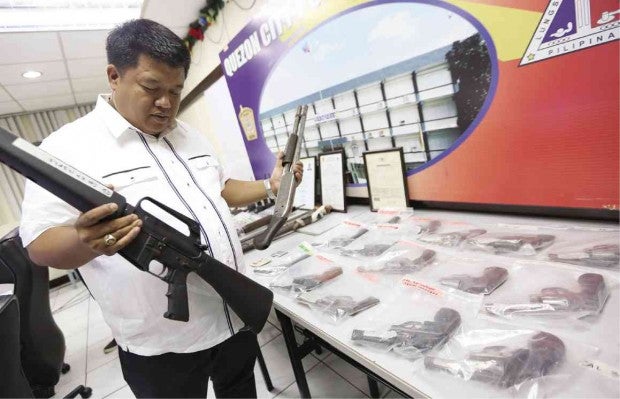 FROM CAMP CRAME’S BACKYARD Supt. Jay Agcaoili, head of the QCPD’s special operations unit, shows the firearms found by his men at a house that allegedly provided cover for a gunrunning syndicate operating just outside the general headquarters of the Philippine National Police. NIÑO JESUS ORBETA

ON PAPER, this bungalow in Quezon City—just across the street from the general headquarters of the Philippine National Police—supposedly houses a merchandising firm that sells packaging materials and office supplies.

But a buy-bust operation Friday night revealed another enterprise: A gunrunning syndicate said to be in operation for the last 10 years.

The house was registered as the office of Tin Wo Rock Enterprise, a company that sells packaging materials and office supplies in bulk, according to Supt. Jay Agcaoili, head of the QCPD Special Operations Unit.

But a sting operation by the QCPD-SOU discovered no such products but a cache of 20 .38-caliber revolvers, a .45-caliber pistol, an M16 rifle, and five dismantled shotguns.

Arrested were the company’s security officer Carlo Estoya, 41, the middleman who sold the .45-caliber pistol and the M16 to an undercover policeman; Eduardo Obra, 57, allegedly the syndicate’s financier; and house helpers Ryan Quimanhan, 19, and Benky Payla, 20, who served as lookouts while the transaction was ongoing.

Company owner got away

Obra is also the father of the company’s registered owner, Christopher, who “eluded arrest,” according to Agcaoili.

In an interview with the Inquirer on Saturday, Agcaoili said the older Obra revealed during the initial interrogation that his gunrunning group had been operating for the last 10 years, selling firearms on the cheap “like candy” to civilians.

The guns were “originals” but were mostly unregistered, some with licenses that already expired in 2002 and in the 1990s, the official said. “None of them are legal. Even if they were registered, the suspects are not authorized to sell guns.”

Friday’s operation targeted only Estoya, but after he and the buyer sealed the deal for the .45-caliber and the M16 at a nearby convenience store, the suspect also offered him some revolvers.

When the buyer asked if he could see the revolvers first, Estoya led him to Obra’s house, enabling the undercover agent to confirm a tip that it was being used as “storage” for illegal firearms.

The QCPD-SOU had been monitoring the group for nearly a month after receiving that tip.

Describing the house, Agcaoili said: “Outside, you’d see the garage roof had already caved in. But when you get inside, it’s air-conditioned and organized.”

Business permits and other documents for Tin Wo Rock Enterprise—issued in 2013 and 2014—were mounted on the walls, he added.

A follow-up investigation is underway to find other possible members of the group, determine its scope of operations, and check whether the confiscated guns had been used for earlier crimes.

It will also look into the possibility that the group has a well-placed “coddler” in the PNP, the house being near Camp Crame, Agcaoili said.

Charges of gunrunning and illegal possession of firearms are being readied against the arrested suspects in the city prosecutor’s office.