Clinton must choose how to address data breach in Democratic debate 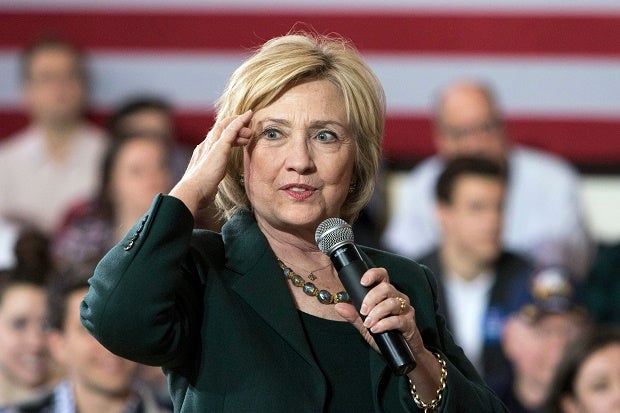 WASHINGTON, United States—In the first debate of the Democratic presidential campaign, Bernie Sanders dismissed concerns about Hillary Clinton’s use of a private email account and server while she served as secretary of state, saying Americans were tired of talking about her “damn emails.”

As the candidates take the stage for their last match-up of the year, will Clinton, the Democratic Party front-runner in the 2016 presidential campaign, return the favor?

Friday’s revelations that four members of Sanders’ campaign staff improperly accessed voter information compiled by Clinton’s campaign shook up what had been a relatively civil race. It is a development that has the potential to transform a sleepy Saturday night debate into something far livelier.

The question facing Clinton is how forcefully to confront Sanders about the actions of his campaign staff and whether to defend the reaction of the Democratic National Committee, which cut off Sanders’ access to the party’s voter database after learning of the breach.

At the center of the dispute is an extensive trove of voter information maintained by the DNC. The campaigns are able to add their own information to that database, information they use to target voters and anticipate what issues might motivate them to cast ballots.

In Clinton’s case, campaign manager Robby Mook said the information stored in the database and illicitly reviewed by Sanders’ team included “fundamental parts of our strategy.” Experts said the Sanders campaign employees who accessed the Clinton voter information without authorization appear to have broken the law.

“Our data was stolen,” Mook said. “The data that they reached in and took from our campaign is effectively the strategic road map in those states.”

It was an allegation rejected out of hand by Sanders’ campaign, which filed a federal lawsuit against the DNC seeking to regain access to the voter records. The lawsuit argued the DNC’s actions have caused Sanders’ campaign “injury and financial losses.”

“It’s outrageous to suggest that our campaign ‘stole’ any data,” said Sanders spokesman Michael Briggs. “What is true is the data we collected and need to run a winning campaign is now being stolen from us by a DNC dominated by Clinton people.”

Briggs’ comment was part of an effort by Sanders’ team to turn what seemed like a clear breach of ethics—and potentially the law—into a political advantage. Even before the lawsuit was filed, the Sanders campaign sent a fundraising email to supporters that said the DNC has placed “its thumb on the scales in support of Hillary Clinton’s campaign.”

Notably, the email made no mention of the campaign’s decision to fire a staffer involved in the data breach and the admission of campaign manager Jeff Weaver that the staffer’s actions were “unacceptable.”

The controversy over the data breach comes as Sanders was already struggling to draw attention to his economically-focused campaign message after the attacks in Paris and San Bernardino, California, shifted the focus of the 2016 campaign to national security.

“He’s got to refocus Democrats onto his issue ground,” said Paul Maslin, a Democratic pollster unaffiliated with either campaign. “It’s been usurped by events.”

Throughout his insurgent bid for the White House, Sanders has cast himself as being above politics as usual. The independent senator from Vermont has vowed to avoid personal attacks and other kinds of political dirty tricks.

Clinton aides argued Friday that message is undermined by the newly revealed actions of his staff. They said the information the four Sanders staffers reviewed in 25 separate searches included details on voter turnout and candidate preferences, revealing their campaign’s approach in early voting states such as Iowa and New Hampshire.

“This was an egregious breach of data and ethics,” said campaign spokesman Brian Fallon.

But for all the bluster Friday, Clinton could choose to downplay the issue entirely once on the debate stage—as Sanders did with his dismissal of questions about her use of email. By doing so, she would likely avoid alienating Sanders supporters—the passionate liberal voters she’ll need to win the general election should she capture the Democratic nomination.

And there were already signs of détente late Friday night.

“We hope that the court will resolve this matter tonight and the Sanders campaign has access to their voter files right away,” Fallon said, “with adequate protections of our proprietary information, which we understand could be completed in short order.”