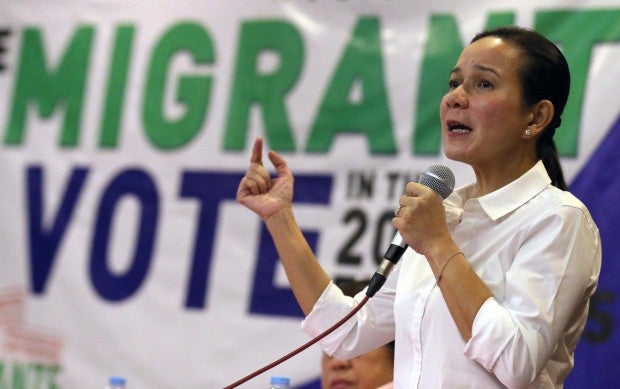 Until her disqualification case has been resolved with finality, the name of independent presidential candidate Sen. Grace Poe must be retained in the ballot of the 2016 elections, a senatorial aspirant said on Friday.

Pasig Rep. Roman Romulo, who’s running under the Poe-led Team Galing at Puso, said the Commission on Elections (Comelec) should include Poe’s name on the roster of presidential candidates even if the Supreme Court shall have issued no decision by the time of the official release of the candidate list.

“It would be a travesty of the democratic process if they remove Sen. Poe from the ballot without the cases being resolved with finality,” he said in a statement.

“Let us put this issue to rest to stop fueling speculations that Sen. Poe has been disqualified. I ask the Comelec to put her on the list,” Romulo said.

The Comelec has postponed until Dec. 23 the release of the initial list of candidates, saying it will make public the final list in January.

The Supreme Court has begun hearing the appeal of Rizalito David questioning the Senate Electoral Tribunal’s decision favoring Poe on the issue of her disputed status as a natural-born citizen.

If an adverse ruling is made by the Comelec en banc on the citizenship and residency issues raised against Poe, she will appeal the decisions before the Supreme Court (SC).

Romulo said in the “unlikely event” that the high tribunal would rule against Poe, “the Comelec can always nullify the votes cast for her.”

“Given the time constraints and considering that the SC might make a decision past the Comelec deadline, the best and right thing to do would be for the Comelec to include Sen. Poe on the list of candidates,” Romulo said.

He also reiterated his call to let the voters decide on the issues raised against the neophyte senator.

“With utmost respect to the Comelec and the Supreme Court, the issues raised against Sen. Poe should be resolved with finality by the electorate when they cast their votes in May 2016,” he said.

“Let her run and bring her case to the people. It may well be considered as a plebiscite on a constitutional issue,” Romulo said.