In Cebu, a measure of ‘AlDub’ popularity 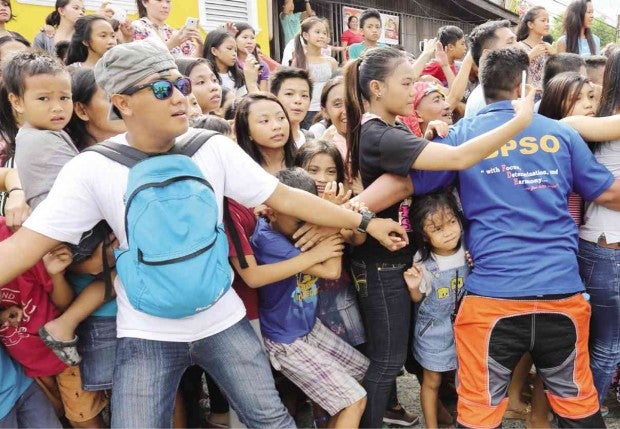 Village watchmen form a human barricade to prevent enthusiastic fans from rushing to their idols, actors Alden Richards and Maine Mendoza, as the pair made famous by portraying the characters “AlDub” in the noontime TV hit “Kalyeserye” segment of “Eat Bulaga” bring their antics to Cebu City. JUNJIE MENDOZA/CEBU DAILY NEWS

CEBU CITY—To measure the popularity of the TV craze “AlDub,” try to take a look at what fans had to do to watch the hit love team, a fixture in the noontime show “Eat Bulaga,” bring their antics live here.

Gloria Grace Quiros took a half-day off from work to be in Barangay Lorega San Miguel, a thickly populated depressed area that was chosen by AlDub’s producers as location for their popular “Kalyeserye” segment.

Quiros brought her daughter, Annica, with her, prompting the child to miss her school’s Christmas party.

The mother and daughter wanted only to see in person the AlDub team composed of actress Maine Mendoza and actor Alden Richards, who have shaken social and mainstream media.

Mother and daughter Quiros left home in Mandaue City as early as 6 a.m. on Thursday to be in Lorega and secure vantage positions.

Quiros wore a red AlDub shirt, Annica a replica of the red polka dot apron made famous by Mendoza’s character as Yaya Dub.

Quiros tried to find a reason for her going gaga over AlDub. The segment, she said, promotes good values.

“They are simple and God-fearing,” said Quiros.

But there is, indeed, a good reason for her to keep watching the show, said Quiros. Her husband, Chester, suffered a stroke in May that paralyzed half his body and AlDub has become sort of part of his therapy.

A character in Kalyeserye, Lola Tinidora, is a particularly amusing one for Chester, according to Quiros.

Every afternoon, Quiros added, her family gathers in front of the TV to watch AlDub.

Annica, youngest of three children, said she chose AlDub over her school’s Christmas party because she loved Mendoza’s antics.

“She is good in doing dubsmash (mimicking singers without making a sound),” Annica said.

Quiros and Annica were among some 5,000 people who watched Kalyeserye in Lorega that also brought to the village the three supposed grandmothers of Yaya Dub—Lola Tidora, portrayed by Paolo Ballesteros; Tinidora, Jose Manalo; and Lola Nidora, Wally Bayola.

The sound of cheers from the crowd was deafening as Richards and Mendoza played out their characters live in Lorega.

Another fan, Remie Dela Cruz, said she had only two hours of sleep to be in Lorega by 5 a.m. She said it was worth it after she was able to take pictures of Richards and Mendoza up close.

Dela Cruz, an Accounting student from University of Cebu, said she was glad, though, that Kalyeserye’s schedule did not conflict with her classes.

For several hours, Lorega became the heart and soul of the city with roads leading to it closed to all types of vehicles from 8 a.m. to 3 p.m.

Fritzgerald Herrera, Lorega village chair, said his place was overwhelmed by the number of people who came to see AlDub.

Attempts to keep the location of Kalyeserye under wraps were futile. Social media were bursting with news about where the AlDub pair would be next.

The village, however, was able to manage, according to Herrera. No untoward incident was reported except for four cases of people who fainted simply because they came to the village with empty stomachs just to secure vantage points.

Someone lost a mobile phone but Herrera said it was an isolated case that happened long after the event. “It was a security nightmare but we managed,” he said.