Iran: ‘No agreement’ seen in key issues before Syria talks 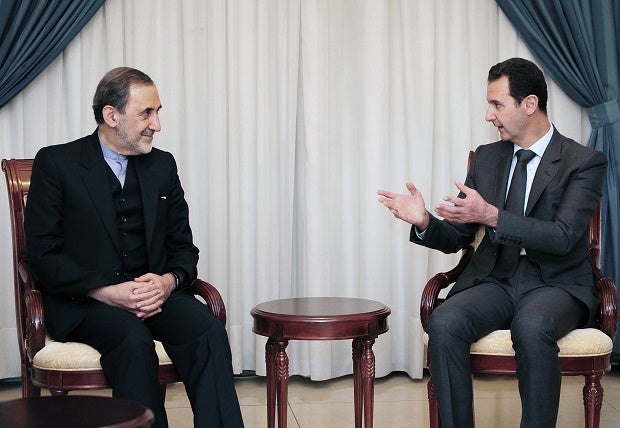 In this photo released by the Syrian official news agency SANA, Syrian President Bashar Assad, right, meets with Ali Akbar Velayati, a top adviser to Irans supreme leader Ayatollah Ali Khamenei, in Damascus, Syria, Sunday, Nov. 29, 2015. State media quoted Assad as saying that he is determined to continue fighting terrorism in all its forms because Syria and its allies are confident that eliminating terrorists is the main step in bringing about stability to the region and the entire world. SANA via AP

UNITED NATIONS—Iran’s foreign minister said Thursday there “seems to be no agreement” on two key issues just hours before the latest round of Syria talks on Friday morning in New York.

“Card-carrying members of al-Qaida do not satisfy the conditions that we set for members of the opposition,” Zarif told reporters, ruling out any affiliates of the extremist group. “The opposition should be serious, and it should be inclusive.”

Zarif also said “we still don’t know” if there will be any concrete progress in the talks that are aimed at bringing an end to Syria’s conflict.

Russia and the United States are leading the talks, but Russia’s ambassador to the U.N. told reporters that he sees attempts to “undercut” the communiques that have been agreed upon in the Syria discussions so far. Ambassador Vitaly Churkin didn’t give details.

Diplomats said the five permanent Security Council members, which include Russia and the United States, had not yet come to agreement on a draft resolution Thursday evening that the council is expected to adopt just after Friday’s talks endorsing the process.

“I’m not sure it’s going to happen,” Churkin said of the resolution, which has been described as a rare gesture of unity in a Security Council that has been bitterly divided on Syria.

By contrast, British Ambassador Matthew Rycroft said the draft was “in good shape.”

Russia, a top Syria ally, and the West continue to be split on the central issue in any discussions on a political transition: the fate of Syrian President Bashar Assad.