US ambassador to Japan Kennedy defends Okinawa base plan 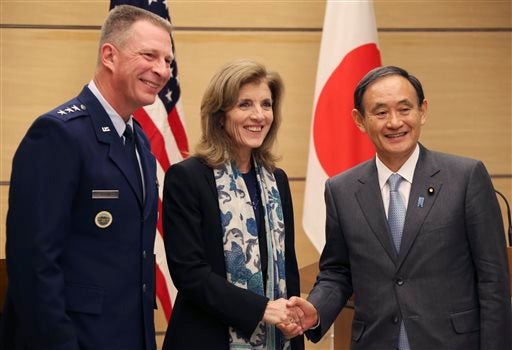 TOKYO— U.S. Ambassador to Japan Caroline Kennedy defended on Thursday a controversial proposal to relocate a U.S. Marine Corps base on Okinawa in southern Japan as the best of many options considered.

In a rare news conference in Tokyo, she also expressed confidence that the U.S. Congress would ratify the Trans-Pacific Partnership, a trade pact with 12 nations, including Japan and the United States.

“Trade agreements are never easy to pass, but they always do,” she said at the Japan National Press Club. “President Obama is absolutely committed to this agreement … so I have no doubt that when this all comes together, that TPP will pass.”

In Okinawa, the plan to move the Futenma air station to a less congested area has run into stiff opposition from residents and Okinawan officials who want it taken off their island completely.

Kennedy, who has been ambassador for about two years, said the United States is grateful to the people of Okinawa for their support and is working hard to reduce the impact of the U.S. military bases on the island.

“People worked very hard, considered many options and developed this plan that I think is the best of any other plan that was considered,” she said.

“I believe that we are at a turning point, and that the next few years will be critical, and once we’re able to move Futenma … that the situation will improve,” she said. “And we’re committed to doing that.” TVJ