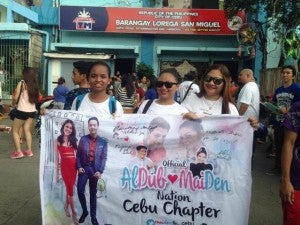 CEBU CITY, Philippines — Five months after the accidental pairing of Alden Richards and Maine “Yaya Dub” Mendoza caught the imagination of millions of Eat Bulaga viewers, fan fervor in this city remains as high as ever, as shown by the thousands who swarmed the street on Thursday, where the hit “Kalyeserye” was staged live.

Gloria Grace Quiros had to take a half-day off from work just to see the phenomenal “AlDub” team during the Eat Bulaga’s live show here in Barangay Lorega San Miguel, Cebu City.

She brought her eight-year-old daughter, Annica, who ended up missing her school’s Christmas party because she wanted to see Yaya Dub.

Mendoza and actor Alden Richards are part of the love team called AlDub –a play on the names of Richards and Yaya Dub – that has hooked millions of viewers of Eat Bulaga.

Aldub is featured in  Kalyeserye or the street theater series of Eat Bulaga’s “Juan for All, All for Juan” segment.

Grace and  Annica left their house in  Mandaue City at 6 a.m. on Thursday just to be at Barangay Lorega in Cebu City.

Both admitted being AlDub fans, particularly due to the values being promoted by the show about love, relationship, courtship and family.

“From the start, I have been a fan. They (the characters) are simple and God-fearing,” Grace told the Philippine Daily Inquirer.

She said AlDub has become therapy for her husband, Chester, who suffered a stroke last May that left half of his body paralyzed.

Chester, she added, was amused by how Lola Tinidora, played by actor Jose Manalo, danced.

Annica, youngest of three children, said she chose to miss her school’s Christmas party on Thursday so she could see Yaya Dub.

“I like her because she is good in doing dubsmash,” Annica said, referring to Mendoza’s style of lip-synching pop songs while making funny faces or exaggerated facial expressions.

Grace and Annica were among the 5,000 people who watched the Kalyeserye in Barangay Lorega San Miguel that featured the three grandmothers of Yaya Dub portrayed by Paolo Ballesteros (Lola Tidora), Manalo (Lola Tinidora), and Wally Bayola (Lola Nidora).

The crowd cheered and took photos of Richards and Mendoza on their mobile phones when the couple emerged from the barangay hall.

Remie Dela Cruz felt lucky enough to get a close-up shot of both Richards and Mendoza.

Dela Cruz, a member of the AlDub Maiden Nation Cebu Chapter, said she only had two hours of sleep because she was already in Barangay Lorega San Miguel at 5 a.m.  But, she added, it was all worth it.

She had the chance to get her shirt signed by Mendoza and Richards.

She also gave a couple a t-shirt and a cake, as  gifts of the group to the tandem on their 22nd Weeksary.

An accounting student from the University of Cebu (UC), Dela Cruz said she was glad that classes were over when the Kalyeserye was brought to Cebu City as it gave her a chance to see Richards and Mendoza.

Vehicles were not allowed to enter the  interior barangay road of Lorega as early as 8 a.m. The road was reopened eight hours later at 3 p.m.

Barangay Lorega San Miguel chair Fritzgerald Herrera said they were overwhelmed by the number of people who attended the event.

Herrera admitted that they tried to keep the venue of the Kalyeserye under wraps but news still came out about AlDub’s visit to his barangay and quickly spread in social media.

Despite the number of people, Herrera said they managed to stage the event with only minor incidents.

At least four persons reportedly fainted after skipping breakfast just to be early at the venue.

A person lost a cellular phone but Herrera said it was an isolated case.

“It was a security nightmare but we managed it,” he added.

Richards and Mendoza also had their mall show at the Sky Hall of the newly opened SM Seaside City.  SFM