US withdrawing 12 warplanes from Turkish air base 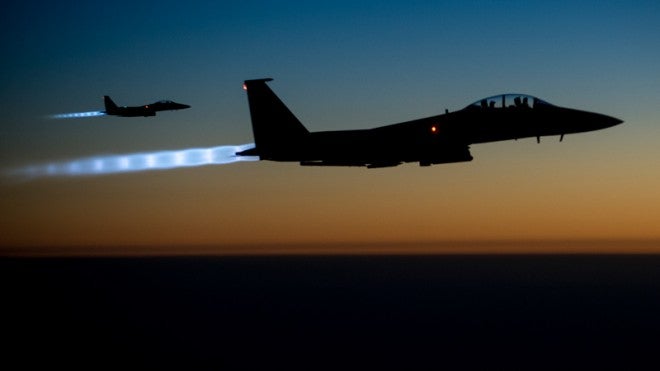 In this Tuesday, Sept. 23, 2014, photo, released by the U.S. Air Force, a pair of U.S. F-15E Strike Eagle flies over northern Iraq, after conducting airstrikes in Syria. The Pentagon has announced that the U.S. would be withdrawing 12 of the top-of-the-line fighter-bombers from a base in Turkey. AP

WASHINGTON, United States — The U.S. is withdrawing a dozen warplanes from a Turkish air base, barely a month after they arrived to help Turkey protect its air space and to conduct strikes against Islamic State of Iraq and Syria (ISIS) targets in Syria and Iraq, officials said Wednesday.

The decision was announced by U.S. European Command in Germany one day after Defense Secretary Ash Carter visited Incirlik Air Base, where the six F-15 Eagles and six F-15 Strike Eagles arrived last month from their home base in Britain. A Pentagon spokesman, Navy Capt. Jeff Davis, told reporters that the timing was a coincidence.

During his visit Carter made no mention of the plan to withdraw the F-15s. He said the U.S. is looking for ways to do more to hasten the defeat of the Islamic State group, including by urging coalition partners to play a greater role.

European Command’s announcement said the F-15s were returning to Britain on Wednesday.

Davis said the withdrawal should not be seen as a change in the U.S. commitment to Turkey or to the counter-ISIS campaign.

“I wouldn’t read anything into us moving these out of there as any sort of less combat capability … to be able to strike in Syria,” Davis said.

The U.S. still has 12 A-10 close-air support aircraft based at Incirlik, as well as drone aircraft and refueling planes. The U.S. intends to replace six of the departing F-15s with a like number of additional A-10s, according to a senior U.S. defense official who spoke on condition of anonymity because the deployment has not been announced.

Some coalition partners have expressed a willingness to send more planes to Incirlik before the end of January, the senior U.S. defense official said. That would push the total number of coalition warplanes at Incirlik back to, and possibly above, the total of 59 that were based there before the F-15s began leaving Wednesday, the official said.

When Turkey agreed earlier this year to permit the U.S. to conduct airstrikes against the Islamic State with planes based at Incirlik, the Pentagon touted the decision as an important milestone. It shortened the time and distance required to conduct airstrikes in Syria and Iraq, compared with strikes flown from bases in the Persian Gulf area.

At the beginning of September there were 15 coalition aircraft based at Incirlik as part of the counter-ISIS coalition.