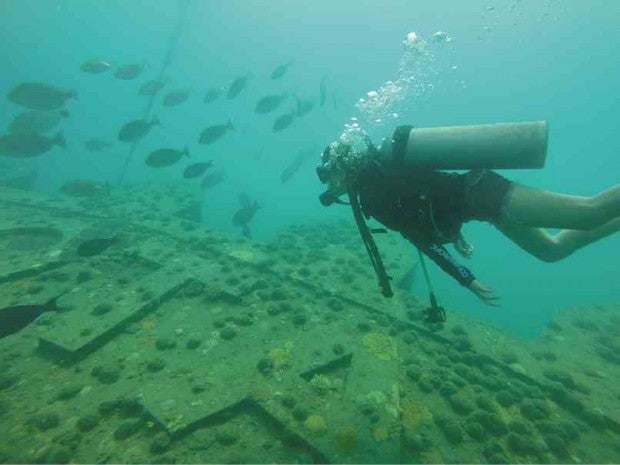 DEEP-SEA ATTRACTION A diver meets a school of fish near the giant artificial reef shaped like a Rotary Club emblem. CONTRIBUTED PHOTO

ISHERMAN Godie Romualdo still remembers the days when fish had gone scarce in the Lamon Bay off his town of Atimonan in northern Quezon province. “My catch was barely enough to feed my family,” he said.

Like several other fishing grounds in the country, fish stocks had been depleted in the bay that borders four other towns—Mauban, Gumaca, Plaridel and Lopez. Coastal villagers attributed the situation to massive commercial operations and illegal fishing activities.

That was over six years ago, when the local chapter of the Rotary Club, an international service organization of business and professional leaders, decided to drop a giant concrete replica of its wagon wheel emblem into the bottom of the Lamon Bay off the coastal village of Balubad to serve as an artificial reef.

“The schools of fish have returned in this part of the bay after the dropping of the Rotary reef,” Romualdo, 67, told the Inquirer. “Lapu-lapu” (grouper), “alumahan” (mackerel), “ma-ya-maya” (red snapper), “la-bahita” (surgeon fish) and other fish are now found there, he said.

Following the success of the artificial reef project, the municipal government adopted it as a major component of its protection and rehabilitation program for the Lamon Bay. It has become a necessary component in the revival of the bay in the absence of mangrove forests in the area, the natural breeding ground of marine species.

Now, at least 10 artificial reefs are found in the waters off Atimonan, sustained by a municipal budget of P500,000 yearly.

“The Rotary artificial reef has served as the catalyst to the local government’s renewed protection and rehabilitation program of our seas,” said Greg de Gracia, a former fishery consultant of the municipality and one of the principal proponents of the project.

In August 2009, the Rotary Club of Atimonan (RCA) collaborated with environmentalists, fisherfolk and members of civic groups to save and rehabilitate their part of the bay from years of destructive fishing.

With the help of Army soldiers, a giant concrete structure in the form of the Rotary logo was created at a cost of P1.2 million. It was touted to be the Philippines’ biggest artificial reef, measuring 4 meters high and 21 meters in diameter, and weighing 85 tons, and the Rotary’s biggest emblem in the world.

The gear wheel has six spokes and 24 cogs, with “Rotary International” painted on it with the club’s official royal blue and gold colors.

Soon after the story appeared on the Inquirer’s front page and posted on its online edition, local and international tourists, who are mostly Rotarians, started to arrive in Balubad. According to De Gracia, the story and photo were shared over a thousand times on Facebook by club members across the globe.

The feat has become the subject of interest of Rotarians who considered it one of the proud achievements of the organization in modern times, he said. “The public became aware that Rotary is not just a civic organization but also an advocate of socially relevant projects and in this case, environmental protection.”

Oscar Chua, past president of the RCA and project chair, said that “whenever we attended a Rotary event, we were always given recognition because of the reef.”

De Gracia, who owns a resort in the town, said the Rotary reef had become a favorite underwater attraction for local and foreign divers, mostly Koreans and Japanese.

“The divers are thrilled watching friendly fish, even the big ones feeding on their hands. That’s the advantage of the site—our fish are not afraid of the divers,” he said.

Divers usually converge in Atimonan from April to October, when De Gracia said “the sea is calm and the weather is most often conducive to spend the time on the beach.”

With the arrival of tourists, local fishers have found an extra source of livelihood—ferrying them to the reef site, or a distance of a few hundred meters away from shore—on improvised but sturdy bamboo rafts with a shelter shaped like a nipa hut.

Charging P1,000 per trip, a raft operator earns P2,000 to P3,000 a day during peak season. “If there are a lot of tourists, I seldom go out in the sea to fish. I just service the divers and picnickers with my raft,” Romualdo said.

De Gracia said some tourists “just swim around the raft and feed the fish around them.” The operator would usually just wait for the divers to surface.

With the project and the influx of tourists, local officials and fishermen “are now strongly resolved to protect the sea for the sake of future generations,” he said.