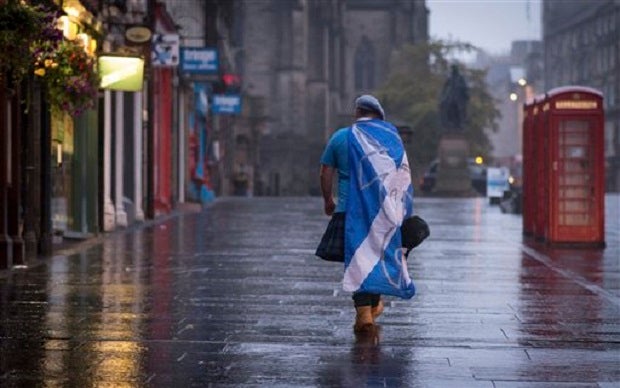 A lone YES campaign supporter walks down a street in Edinburgh after the result of the Scottish independence referendum, Scotland, Friday, Sept. 19, 2014. Scottish voters have rejected independence and decided that Scotland will remain part of the United Kingdom. More than a year later, UK faces another breakup. AP

LONDON — Former Prime Minister John Major has warned that the United Kingdom may break up if Britain votes to withdraw from the European Union in a planned referendum.

Major told BBC radio that a vote to leave the EU would mean a “high probability” that Scotland would have a referendum of its own and decide to leave the U.K.

“The United Kingdom would be fractured, that would be very damaging,” he said Wednesday.

Prime Minister David Cameron is seeking concessions from Europe’s leaders at a summit this week ahead of a planned referendum on Britain’s membership to be held by the end of 2017.

Scotland voted last year to remain part of the U.K. after a bruising referendum campaign. Its leaders want to remain in the EU. TVJ

Cameron lays out demands for Britain to stay in EU