Oriental Mindoro under state of calamity 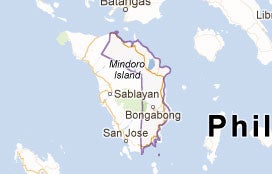 CITY OF CALAPAN – The provincial government of Oriental Mindoro has placed the province under a state of calamity amid widespread devastation wrought by Typhoon Nona and has mobilized all its resources to clear roads to reach areas isolated by the typhoon.

The feverish mobilization of resources came amid mounting calls for help from devastated towns and reports indicating that damage to agriculture alone has already went beyond P200 million mark.

Vincent Gahol, officer in charge of the PDRRMC, said the provincial government has been exerting efforts to restore electricity in Oriental Mindoro by Friday, or at least in Calapan City, the economic center of the province.

Provincial agriculturist Christine Pine said their initial estimates showed that damage to agriculture has reached P202,096,750, almost more than half of which, or P144 million, was in Pinamalayan town.

Clearing operation in Calapan meanwhile continued today even as most commercial establishments, in the absence of power generating sets, remained closed.