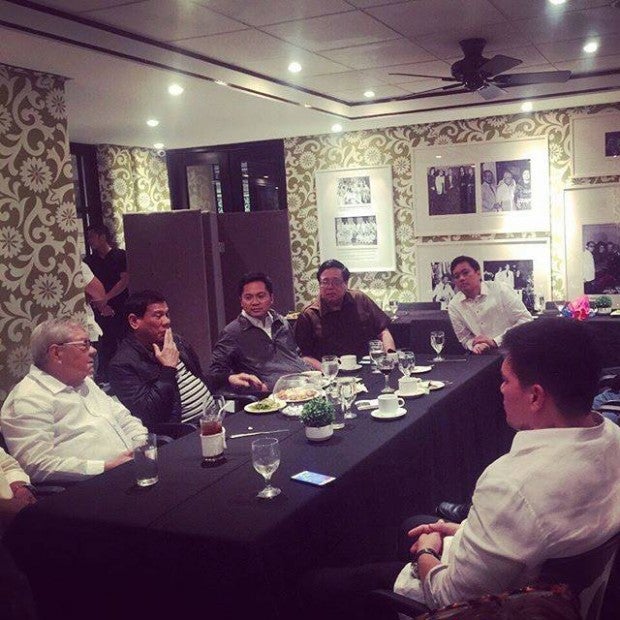 A kill list is no topic to bring up in a Christmas party.

In an interview, Belmonte said he did not know Duterte was arriving for the party. Duterte, coming in late, was even made to sit beside Speaker Belmonte.

Belmonte said he did not want to bring up to Duterte his earlier challenge to bare the list of the people he allegedly killed in a bid to stamp out criminality in Davao city.

The campaign manager of LP standard bearer Mar Roxas said Duterte was quite “cool” in his speech during the party about his vision in addressing criminality.

“He was quite cool, he was not raising his voice, he was just stating the facts from his point of view,” Belmonte said.

Duterte did mention an incident when he had killed a suspected rapist of a foreigner, Belmonte said.

Belmonte said a kill list is not something he wants to bring up in a Christmas party.

“Every time he raises the point, ‘Hey, you haven’t named the names yet,’ I think that’s the polite way (of saying it). Why in this Christmas season will you get into a fight with anybody?” Belmonte said.

Belmonte figured in the word war with Duterte after the latter criticized LP standard bearer Roxas for failing to handle stress in the government response during the onslaught of supertyphoon Yolanda (international name Haiyan) in Nov. 2013.

Belmonte is Roxas’ campaign manager for the 2016 elections.

Roxas then embroiled himself in the scuffle and retorted about the “myth” of Davao city being the safest city in the world. Duterte fired back and said Roxas’ economics degree in the University of Pennsylvania’s Wharton School was a lie.

The word war turned to dares for a fistfight, slapfight, and even a gun duel, between the two warring presidential bets.

READ: Duterte shoots back at Roxas: Let’s have a gun duel instead

Belmonte said Duterte risks his credibility if he refuses to bare the list of people he killed.

In a separate interview, Duterte’s latest ally Davao city Rep. Karlo Nograles, a member of the NUP, said the kill list was not brought up by Belmonte.

Nograles said it was even Duterte who lamented in jest why Belmonte did not bring up the dare because he already had the kill list.

(The topic wasn’t part of the talk. Mayor Duterte was with me somewhere else and the topic on the [kill] list was brought up. Mayor Duterte said Speaker Belmonte didn’t ask about the list though all along he had the list with him.)

Nograles is the son of former House Speaker Prospero Nograles, Duterte’s bitter political rival. Duterte and Nograles had since patched up after Duterte announced his presidential bid in 2016.

Former Speaker Nograles lost to Duterte in the 1992 and 1998 mayoral election. In 2010, the elder Nograles again ran for mayor against Duterte’s daughter Sara and lost. The elder Nograles served as House Speaker from 2008 to 2010.

In a television interview, Duterte said he did not bring the list of the people he killed during the party.

Duterte filed his certificate of candidacy as standard bearer of Partido Demokratikong Pilipino-Laban ng Bayan (PDP-Laban) amid questions of his eligibility to replace Martin Dino, who earlier withdrew his candidacy for president because of a petition to declare him a nuisance.

While he was hailed for his anti-crime crusade, Duterte had been linked to the Davao Death Squad, an alleged gang of assassins purportedly

responsible for the deaths of 1,000 suspected criminals in the city since Duterte became mayor in 1988.

“They say I am the death squad? True, that is true,” Duterte once said in a television interview admitting his ties to the alleged group. TVJ