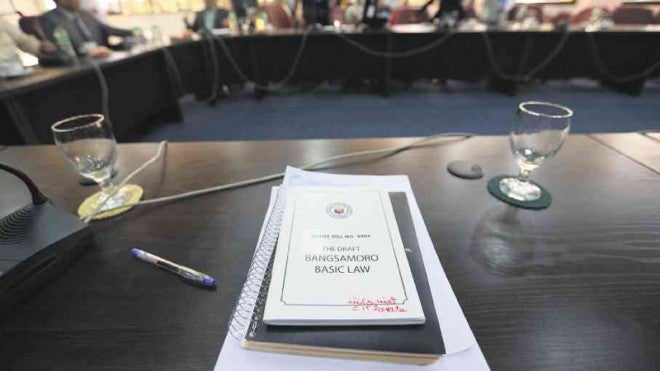 A draft of the Bangsamoro Basic Law lies unread on a table in the House of Representatives after the congressional inquiry on the death of 44 police commandos seems to take precedence; the BBL is tabled in the meantime. LYN RILLON/INQUIRER FILE PHOTO

The minority floor leader of the House of Representatives thinks the biggest failure of Congress is its failure to pass an “acceptable” version of the proposed Bangsamoro basic law (BBL).

In a press conference Wednesday, San Juan city Rep. Ronaldo Zamora said the minority bloc opposed the present form of the proposed law but the majority is still pushing for its passage just for the sake of it.

Despite pressure from Malacañang, the BBL is stuck in the plenary for debate months after it was set for interpellations last June.

“The biggest failing [of Congress] is the failure to pass the BBL in an acceptable form,” Zamora said.

Zamora said the minority bloc was the first to oppose the opt-in provision, which allows for the expansion of the core Bangsamoro territory upon a petition of the voters.

In the fifth or 10th year after the passage, according to the bill, the Bangsamoro territory may spill over to contiguous areas upon a petition of voters under the said areas.

Zamora lamented that the majority lawmakers refused to listen to the inputs of the minority.

Zamora also said the bloc finds the budget, such as the bloc grant, for the creation of the Bangsamoro entity hefty.

“Walang mangyayari diyan kung hindi niyo papakinggan ang sinasabi namin (Nothing will proceed from this if you will not heed us). Don’t forget, we are the first to oppose the opt-in provision. We have shown that the [budgets] that are being allotted are unrealistic, some are far too large for what has been done in that particular region of our country,” Zamora said.

He said the bill in its present form also does not address the issues of land reform and environmental protection.

“Land reform, land redistribution, protection of the environment and so on, it’s almost completely out of the picture in the present BBL,” Zamora said.

The House leader said he proposed holding a party caucus in Congress and let everyone speak his or her views and not just field the BBL for debate in the House committees.

“Let’s do it in public and with everybody participating. That is something we have long mightily tried to do but we are not being listened to,” Zamora said.

The interpellation on the BBL was stalled earlier because of quorum woes hounding the chamber as the 2016 campaign period draws near.

President Benigno Aquino III talked with some 150 lawmakers in a bid to get their support to speed up the passage of the bill before next year, when it is seen that quorum would be more difficult to achieve because of the election campaign.

The President urged lawmakers to seize the opportunity in passing the bill to respond to the threat of global terrorism.

Speaker Feliciano Belmonte Jr. has said that the House plans to finish the plenary debates before Congress goes on Christmas break on Dec. 19, and finally pass it when it resumesJan. 19, 2016.