EU demands Italy use force to fingerprint all migrants 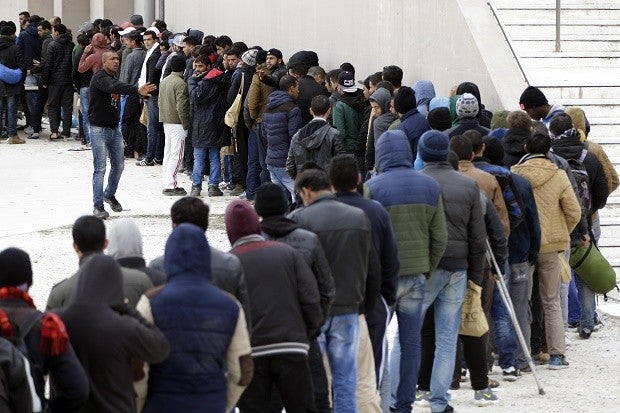 People queue for food at a former Olympic indoor stadium in Faliro, southern Athens, on Friday, Dec. 11, 2015. Hundreds of migrants have been temporarily housed in the stadium after being removed this week from Greece’s northern border with Macedonia, which only allows Syrians, Afghans and Iraqis through on their trek to wealthier European countries, rejecting others as economic migrants who do not merit refugee protection. Greek authorities have urged migrants who can’t continue north to seek asylum in Greece or return home. AP

ROME, Italy — The European Commission on Tuesday demanded Italy use force if required to take the fingerprints of migrant arrivals after launching legal action against the country for its failure to register all newcomers in an EU-wide database.

Italy needed to develop “a more solid legal framework” to allow for “the use of force for fingerprinting and to include provisions on longer term retention for those migrants that resist fingerprinting”, the commission said in a statement.

“The target of a 100 percent fingerprinting rate for arriving migrants needs to be achieved without delay,” the statement added.

Italian Interior Minister Angelino Alfano responded Tuesday by saying the Italian legal system already allowed for the use of force in such situations, but other lawmakers expressed concern over the demand.

“That the EU legitimises the use of force against migrants flies in the face of UN conventions on human rights (and) is very worrying,” said legislator Mario Marazziti, president of Italy’s social affairs commission.

The European Commission this week began legal proceedings against Croatia, Greece and Italy for failing to register all migrants in the Eurodac database when they first arrive on the continent.

The EU is grappling for solutions to the arrival of around one million migrants in Europe this year, most of them Syrian refugees from Turkey.

The UN refugee agency said in mid-November that 142,400 people had landed in Italy after making a perilous sea journey across the Mediterranean this year.

A full EU summit on Thursday will discuss a controversial plan unveiled this week for a new force of border guards that could intervene in member states without their consent.