#InquirerSeven most unusual campaigns at COP21

PARIS — The now historic climate change negotiations held in this city gathered not only leaders and representatives of different countries but also groups looking to promote their own causes.

It resulted in a daily dose of creative exhibits and giveaways for delegates and media covering the 21st Conference of Parties (COP21) at the Le Bourget convention center.

The COP21 resulted in the adoption of the world’s first universal and legally-binding agreement to address climate change.

Days and even months before the Paris agreement was officially adopted, civil society and non-government organisations have been pushing for the inclusion of their pet advocacies and issues.

INQUIRER.net, which covered the negotiations first-hand, compiled seven of the most unusual, oftentimes cool, campaigns launched during convention. Here’s our list in no particular order: 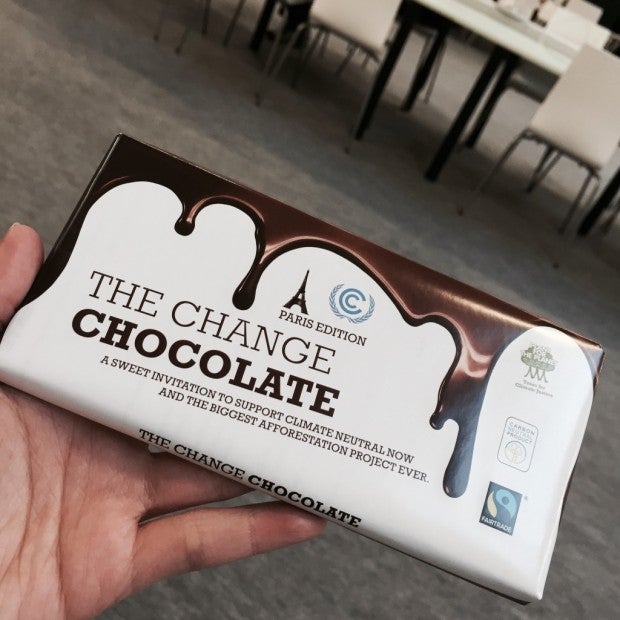 The Change Chocolate is a bar of delicious Swiss chocolate made from cacao planted by farmers who are guaranteed fair wages. They are tasked to plant trees for every five chocolate bars sold.

During the first several days of the COP21, volunteers from the Plant-for-the-Planet gave away chocolate bars for promotion to journalists.

READ: LOOK: Climate-friendly products given away at COP21 in Paris 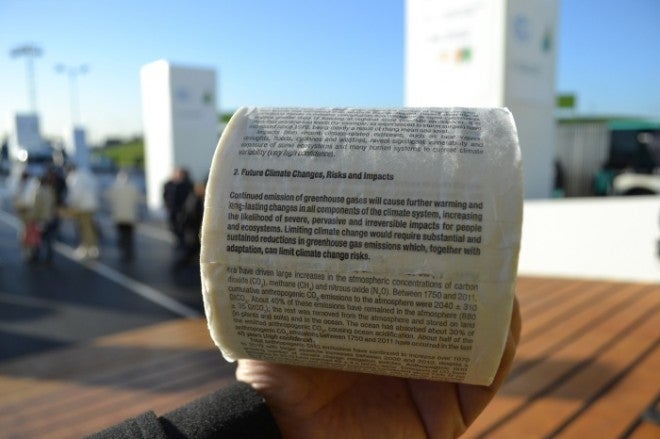 What will you do if you were approached by an anonymous protestor asking you to take a roll of toilet paper with the latest Intergovernmental Panel on Climate Change (IPCC) report on it? Put it in the nearest toilet, of course.

The website www.giveashit.nu allows environmental advocates to send a printed toilet roll to their local officials. Volunteers for the campaign have also attempted to bring the toilet rolls inside Le Bourget. 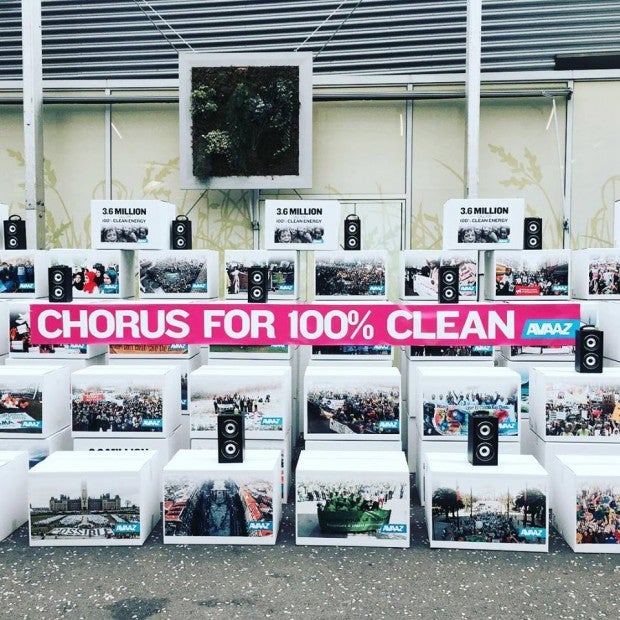 Global civic organization Avaaz came up with an interesting campaign using audio from at least 40,000 people all over the world. They asked their members to call them and share their hopes and wishes for the climate negotiations.

During the conference, Avaaz broadcasted the audio clips through a cool-looking exhibit using several speakers mounted in one of the main hallways of Le Bourget. 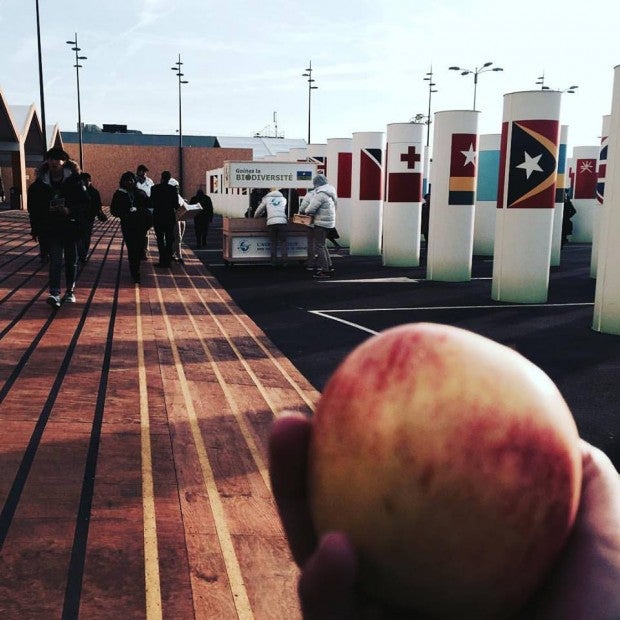 The people of Carrefour, one of the official partners of COP21, regularly gave out apples during mornings at Le Bourget. The apples are from the groups “Quality Lines” produced by a local supplier. The apples are meant to promote biodiversity. 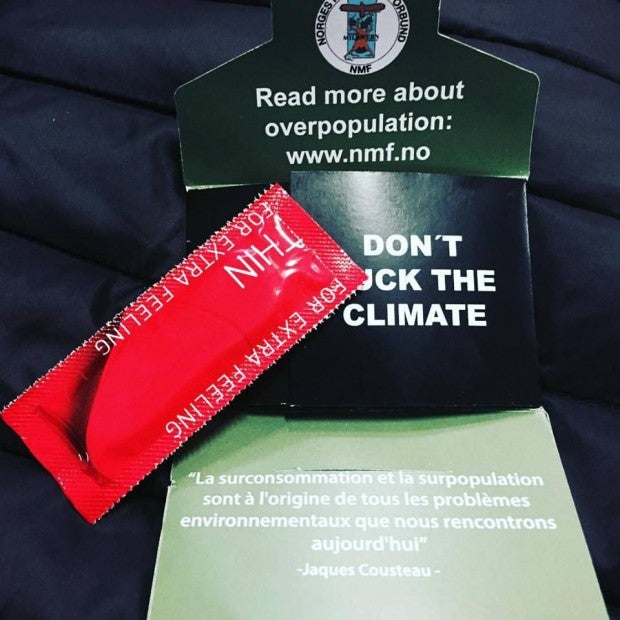 Free condoms given away to promote discussion on overpopulation. Photo by Kristine Angeli Sabillo/INQUIRER.net

One group called Norges MiljovernForbund or “Green Warriors of Norway” also gave out free condoms in the COP21 buses and at the entrance of the venue.

“They should include that in the discussion,” the volunteers would say as they handed out the packets, which had the words “Read more about overpopulation: www.nmf.no.” 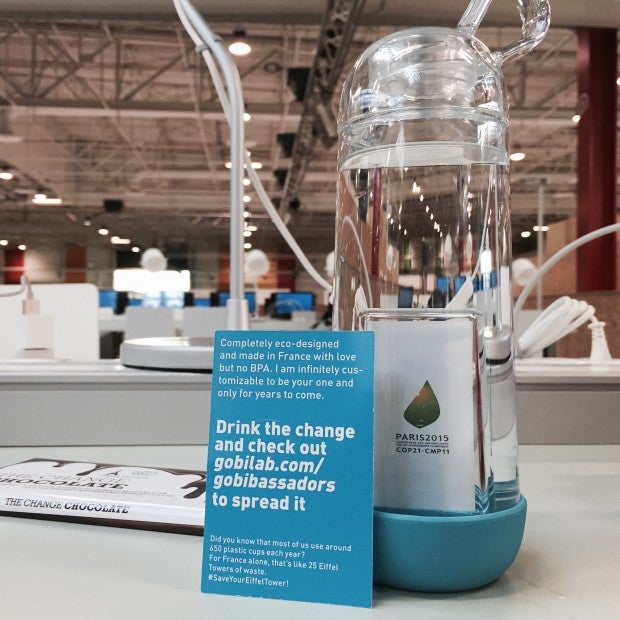 Gobi bottle given away at the climate negotiations. Photo by Kristine Angeli Sabillo/INQUIRER.net

Every journalist received a so-called Gobi bottle from the COP21 organizers. Made from France and supposedly “eco-designed” it is meant to help people save up on plastic cups to reduce waste.

READ: LOOK: Climate-friendly products given away at COP21 in Paris

Place to B is both a hostel and a program for groups and media attending the COP21. Participants may find a place to sleep and eat at Christopher’s Inn, a couple of stations away from the venue, as well as attend climate change events hosted at the place.