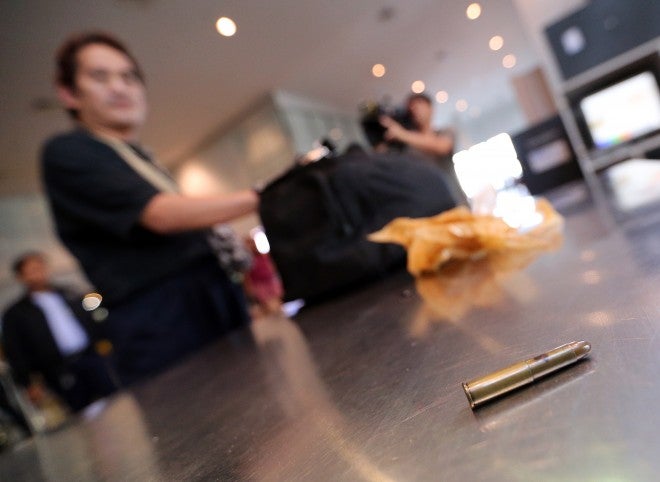 BULLET FOUND AT PASSENGER’S BAGGAGE AT NAIA TERMINAL 3/NOV.4,2015
A bullet is found in the baggage of Rey Salado, a passenger bound for Cagayan de Oro City at the NAIA Terminal 3. Salado admitted that the bullet was his after receiving it from a friend.
INQUIRER PHOTO/RAFFY LERMA

THE Department of Justice (DOJ) has started its probe into the criminal complaint filed against six airport personnel allegedly involved in the tanim-bala (bullet planting) racket at the Ninoy Aquino International Airport (Naia).

Arellano told reporters that the task force will designate a panel of prosecutor to conduct the preliminary investigation.

Once a panel has been created, Arellano said the respondents will required to answer the complaint filed by White and Zoleta.

On the other hand, facing complaint for violation of Article 293 of the Revised Penal Code for Robbery/Extortion, violations of Republic Act 7438 or the Act defining certain rights of person arrested, detained or under custodial investigation and duties of arresting, detaining and investigating officers and Republic Act 3019 or the Anti-Graft Law are Senior Police Officer 2 Rolando A. Clarin, Chief Inspector Adriano Junio, SPO4 Ramon Bernardo and SP02 Romy Navarro.

White was caught allegedly carrying a .22-cal. bullet in his luggage at Naia on Sept 17. He, his father Ryan who is a Christian missionary, and stepmother Eloisa Zoleta, were about to fly to Coron, Palawan province, where they were planning to build a church.

After the Pasay Court dismissed the case against him, he already left the country Monday night.