The latest Social Weather Station (SWS) presidential survey showed Davao City Mayor Rodrigo Duterte emerging as the No. 1 choice of voters, but INQUIRER.net readers believed that the poll was “defective.”

INQUIRER.net posted the question, “A commissioned SWS survey found Rody Duterte the new favorite for 2016. Do you find the results credible?”

In November, the SWS conducted a nationwide survey and asked respondents in Filipino: “With Rodrigo Duterte on this list as a substitute candidate for President, who would you most likely vote for President if the elections were held today?”

Duterte was the choice of 38 percent of voters, giving him a double-digit lead over his opponents.

However, a total of 39.52 percent or 244,407 respondents believed that the survey was credible, saying, “Duterte is really popular now.”

Duterte officially filed his certificate of candidacy for president last November 27 at the Commission on Elections (Comelec).

The tough-talking mayor is running for president with anti-corruption and crime-busting as his platform.

The INQUIRER.net poll is not a scientific survey. It is an interactivity tool that can, within its limits, reflect the interests of online readers. NC/JE 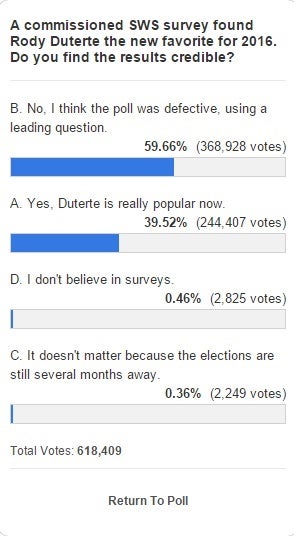