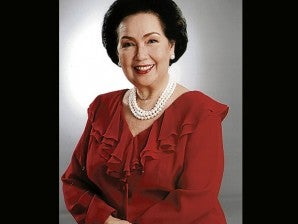 “Most people simply lost their votes, but for me, I lost my reason to live,” said actress Susan Roces, widow of the late actor Fernando Poe Jr.

This was Roces’ reaction to allegations of massive cheating in the 2004 presidential election in which her husband lost to former President Gloria Macapagal-Arroyo.

Roces said she blamed no one for what happened to her husband, but she hoped “the government would finally come up with a system that would keep cheating from happening again in the coming elections. Our votes are sacred. Our ancestors fought hard for us to have the right to choose our leaders.”

A group of policemen, led by Senior Superintendent Rafael Santiago Jr., apologized to Roces for participating in the alleged cheating operation to ensure Arroyo’s victory in 2004.

Roces said she was grateful to people who were brave enough to speak up about what really happened, but “since this is already being discussed by our politicians, I don’t want to meddle any longer. I expect them to do what is right.”

Justice Secretary Leila de Lima recently formed a fact-finding group that would look for evidence of the massive electoral fraud in 2004 and 2007. Poe’s former legal counsel Sixto Brillantes, now the chairman of the Commission on Elections, said he’s still convinced the late actor won in the 2004 election.

Roces declined to comment on the clamor of Poe’s supporters for the late actor to be proclaimed the 14th president.

“I respect those who supported and campaigned for FPJ (Poe). I respect their need to express what’s in their hearts which they have long kept to themselves. I harbor no ill-feelings. The rest of my life, I would just dedicate it to helping others,” Roces said.