No classes in Albay on Monday; 600 stranded at Matnog port 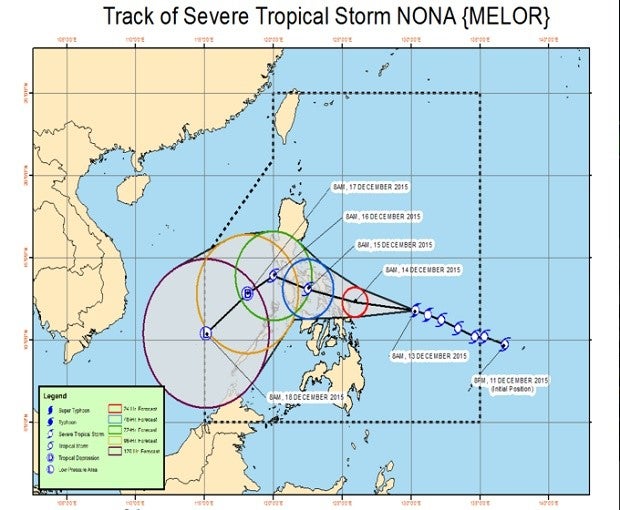 Governor Joey Salaceda said he ordered the suspension of classes in all levels, even if there was no storm signal warning hoisted over the province, due heavy downpours forecast to be brought by Nona starting tonight until Monday afternoon.

Nona  is expected to make landfall near Samar (Eastern Visayas) and Sorsogon (Bicol) on Monday.

The Philippine Atmospheric, Geophysical and Astronomical Services Administration (Pagasa) said that as of 4 a.m. today, the storm’s center was at 605 kilometers east of Borongan, Eastern Samar. It was packing maximum sustained winds of 95 kilometers per hour (kph) and gustiness of up to 120 kph. It is forecast to move west northwest at 19 kph.

Storm Signal Number 1 has been hoisted over Samar Island comprising the provinces of (western) Samar, Eastern Samar and Northern Samar.

Pagasa, in a 10 a.m. flash bulletin, said that thunderstorms were more likely to develop over Albay within 12 hours. Moderate rain has been pouring on Legazpi City and most parts of Albay since early morning of Sunday.

The Office of Civil Defense in Bicol (OCD 5) reported that as of 7 a.m., Sunday, 600 passengers bound for Samar were stranded at the Matnog Port in Sorsogon. The stranded included 24 trucks, 13 buses, eight cars and four sea vessels.

Salceda said that prevent any casualties, the PDRRMC had activated disaster councils in the three cities and 15 town of Albay advising them to be on alert and report disaster preparations round the clock until the storm had passed.

Salceda said he was also considering the suspension of maritime operation in the ports of Legazpi and Tabaco and the town of Pio Duran, even as fishermen have already been advised not to sail during this bad weather.