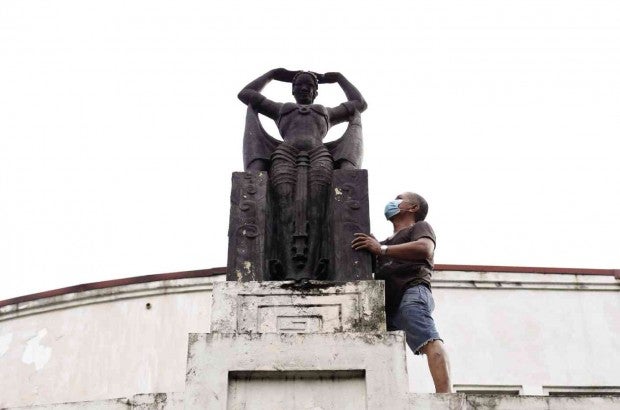 CALLING BACK THE MUSE. Saturday’s drive aims for a top-to-bottom cleanup of the 85-year-old theater, including one of the statues that had survived the ravages of time. LYN RILLON

The massive work needed to revive the “Grand Dame” of Philippine theaters began with little steps on Saturday, with a scrub here and a sweep there—courtesy of volunteers.

A cleanup crew composed of employees from the National Commission for Culture and the Arts (NCCA), personnel from the Bureau of Fire Protection (BFP) and students from various colleges and universities gathered at the Manila Metropolitan Theater in central Manila to do their share in rescuing the structure from years of grime and neglect.

The first of a series of cleanup drives serves as the prelude before experts and professional work teams descend on The Met next year for the multimillion-peso restoration of the 85-year-old Art Deco structure.

Saturday’s activity involved some 200 volunteers from the NCCA and BFP, and around 50 architecture students from 13 schools. It was led by the NCCA Commissioner for Cultural Heritage, Fr. Harold Ll. Rentoria.

Among the guests was show biz icon German “Kuya Germs” Moreno, an active supporter of fund-raising campaigns to save the theater.

Volunteers in white T-shirts and helmets scrubbed and washed the graffiti-covered facade while clearing the hallways of trash and debris. BFP personnel came with fire trucks to supply the water. 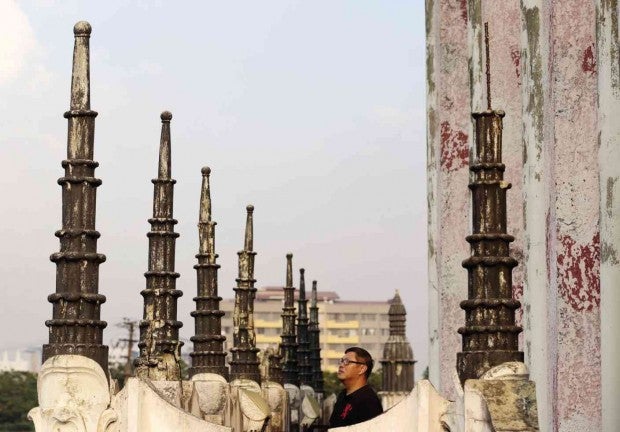 DELIGHT IN THE DETAILS. Neglected and covered in grime, The Met and its unique designs are again seen with fresh eyes. LYN RILLON

“This cleanup drive aims to generate awareness and a sense of ‘possession’ among Filipinos, most especially the youth, who shall inherit our cultural treasures. So that they may realize the value of the Filipino culture,” said Gerard Lico, a University of the Philippines professor who serves as consulting architect for the restoration project.

The road to The Met’s rebirth began in May with the NCCA winning a “bidding war” with the Manila City government and acquiring the property from the Government Service Insurance System (GSIS) for P270 million.

In August, the Department of Budget and Management released a P9.48-million special budget to cover the initial conservation work.

Built in 1930 at the corner of Padre Burgos Avenue and Arroceros Street, the 1,600-seat theater was considered the premier performance venue of its day, with shows mainly catering to upper-class audiences. It also housed works of National Artist Fernando Amorsolo and other masterpieces.

Damaged during World War II, the architectural gem started deteriorating as it assumed mundane roles—as a boxing arena, a cheap motel, a garage and a warehouse. At one point, it served as a shelter for up to 50 homeless families. 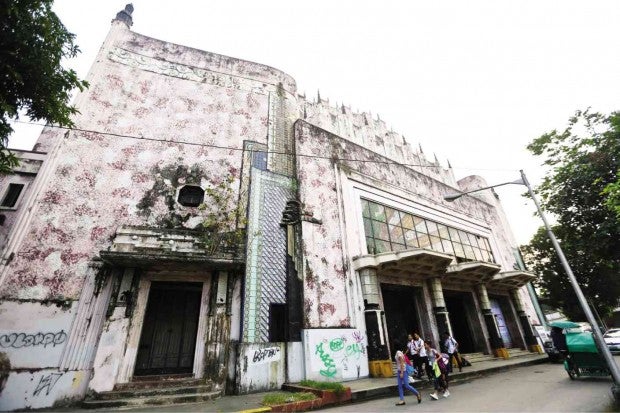 In the 1970s, then First Lady Imelda Marcos had the theater rebuilt but it again fell into neglect after the 1986 Edsa Revolution. It was briefly reused for pop shows and was again closed in 1998 due to an ownership dispute between the GSIS and the Manila City government.

As the theater’s new steward, NCCA aims to rebrand The Met as the “mini Cultural Center of the Philippines”—a People’s Theater—that can host world-class performances and art exhibits, while providing space for an institute of performing arts for students.

The restoration work is expected to take two to three years and will first involve an assessment of the building’s structural integrity using 3D laser scanning and ground-penetrating radar, Lico said. “As much as possible, we would retain the original designs and features inside and outside the theater,” he said.

According to Catherine Andres, administration officer of the NCCA Cultural Heritage Section, The Met’s water supply had already been restored while its power supply is expected to return next year.

The next cleanup drive is scheduled next year and will be announced on the NCCA’s social media accounts, Andres said.