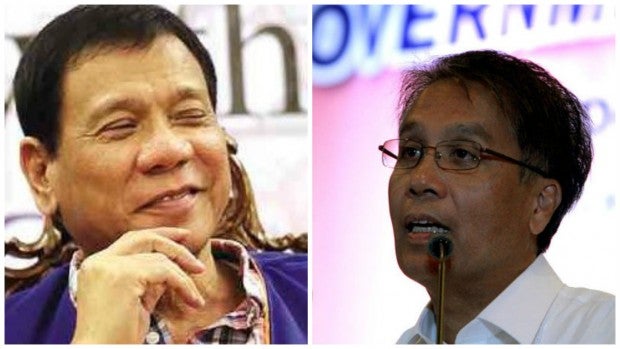 In parrying attacks against him, Davao City Mayor Rodrigo Duterte criticized the administration’s standard bearer Mar Roxas, testifying in a speech in Taguig why his rival cannot handle stress.

“Mar (Roxas) gave the victims (of “Yolanda”) uncooked rice. Why will you give them rice when they don’t have pot and water to cook them?” Duterte said on Friday night before business partners of the Taguig City government during its Thanksgiving dinner at the SM Aura.

The tough-talking Duterte previously recounted how the former interior secretary acted during the first few days of the government’s response in areas struck by Supertyphoon Yolanda (international name: Haiyan) even before he declared his presidential bid in an interview with the Inquirer in August this year, but requested it to be off the record.

On Friday night, Duterte publicly blurted out his issues against Roxas.

Roxas has been heavily criticized for his performance during and after the onslaught of the strongest typhoon in history to hit the country.

“The people if under stress would first of all ask for water. You must distribute water first and food that are ready to eat,” Duterte said.

“I said ‘don’t give them uncooked rice because water is scarce, Mar.’” he said.

Saying Leyte is his native land, Duterte explained he was in Tacloban City two days after Yolanda struck and left thousands dead and structures destroyed.
He claimed that Roxas had even asked some members of Tacloban’s local Bureau of Fire and the engineering office to help in the government’s emergency response.

“This was what I told him, “Mar, can I talk to you privately? You are looking for men connected to the city government. Do not look for those people. For all you know they are already dead. All of them are victims,” Duterte said emphatically.

“Do not create an energy here because there is none,” he said recounting his supposed talk with Roxas.

The Davao City mayor who has been dubbed by the Time magazine as “The Punisher” for his alleged links to the vigilante group Davao Death Squad likewise criticized the administration for declaring a state of calamity instead of a state of emergency.

Duterte made the audience laugh when he was about to mouth an expletive against Roxas but stopped before completing the words.

He reminded the audience how Roxas was caught on video berating Tacloban Mayor Alfred Romualdez and saying “You have to be careful because you are a Romualdez, and the President is an Aquino.”

“When I advised him to change the leadership so he can easily use the fast craft for the relief operations, I was told. ‘The Malacanang has already thought about it,” he said.

“Paano ‘yun, wala namang isip ang Malacanang (How is it possible, Malacanang is a fool),” Duterte said sending the crowd to laughter.

But in the end, Mayor Duterte could not help himself but curse Roxas. “Kung magalit siya, sampalit ko siya, %^&^%,” he said.

In response to Roxas’ earlier statement that the peace and order in Davao is a myth, Duterte said: “Maybe he was right. I am trying to believe because the person talking is a political myth.”

Roxas on Friday during the Galing Pook forum titled Conversations with the Presidentiables on Countryside Development held at the Ateneo De Manila University cited records from the Philippine National Police (PNP), showing that Davao had the fourth highest crime volume in the country.
Duterte said he finds the criticisms coming from Roxas and even Senator Grace Poe, including his alleged human rights abuses, odd.

“When I was helping Mar during the elections, I wasn’t called human rights violator. I am now that we are facing each other in the upcoming elections,” Duterte said.

Read Next
PH officially joins new High-Ambition Coalition
EDITORS' PICK
Another joke? Duterte mulls return of Balangiga bells to keep US away
Harnessing technology for quality education
Connect to PH’s fastest network with new Signature Plan Lite at only P599 per month
Tips for a cheerful life
Hidilyn Diaz wins weightlifting gold in Tokyo Olympics
Duterte: When I said I will fight drugs in 6 months, I thought it was like in Davao
MOST READ
Duterte acclaims Sotto: ‘He can become a good vice president’
Hidilyn shoots not only for gold but also for permanent place in PH sports history
Duterte’s SONAs: From wishing to resign to saying he’s inutile
Go to war with China over West PH Sea? It will be a ‘massacre’, says Duterte
Don't miss out on the latest news and information.