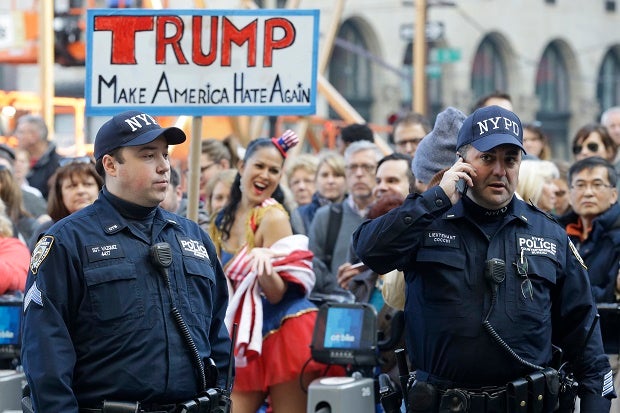 Four protesters chanting “Trump is trying to bring us down, targeting people black and brown,” tried to storm a side entrance into the speech at Manhattan’s The Plaza Hotel as security staff pushed them away.

The protesters were affiliated with various Arab-American and Muslim-American groups, as well as groups for racial equality.

Trump, who is leading most polls in the Republican presidential nomination race, caused a worldwide uproar with his recent call to ban Muslims from entering the United States.

One of the protesters, Jorge Gonzalez, fell down a flight of stairs after a hotel security worker pushed him. He said he was uninjured. Another was thrown to the ground in the hotel lobby.

Two reporters from The Associated Press, Jake Pearson and Warren Levinson, were also forcibly removed from the hotel lobby.

Later in Trump’s speech, about nine other protesters from various advocacy groups stood up to denounce his recent comments to temporarily bar Muslims from entering the U.S., protesters said.

“I’m really frightened by that kind of rhetoric,” said Martha Acklesberg, 69, a member of the group Jews for Racial and Economic Justice, who along with Judith Plaskow, 68, paid to hear Trump speech and then disrupted it in protest.

Trump, said Acklesberg, briefly stopped his speech during their protests and quipped, “when you’re the front runner you get a lot of attention.”

The event, sponsored by the Commonwealth Club, a Pennsylvania Republican group, was closed to the press.