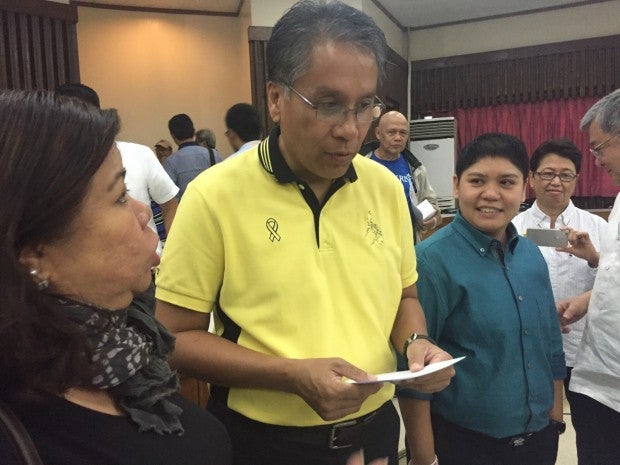 Not in a costume this time, “Juana Change” attended a forum on Friday to hear Liberal Party standard-bearer Mar Roxas and Vice President Jejomar Binay convince the individuals from the local government, civil society organizations and the academe to vote for them in the elections next year.

But both of them failed to convince the political satirist and comedienne, whose real name is Mae Paner.

“Look at Binay, after all those corruption charges; Mar and his lackluster performance, but both of them presented as though they’re the best. They all seemed the good guys,” Paner told INQUIRER.net.

“I mean, look at ‘Yolanda,’ [Department of Interior and Local Government], ‘yung mga hinawakan niyang institutions, puro naman palpak. Same with Binay, all those corruption, political dynasty, but then they’re here and do we hear about their shortcomings? Nothing,” she said.

Asked what could’ve Binay and Roxas said in the forum, the President Aquino supporter-turned-critic said: “They could’ve said at least, this is where I think we failed. I think eto ang nakita kong kakulangan ko.”

The two presented in the forum held at Ateneo de Manila University their plans on addressing issues on peace and order, transportation, poverty, corruption, and unemployment.

After the presidential aspirants delivered a speech and took questions from the audience, Paner both asked them to be transparent in their campaign finances.

“We would like to see where the money goes, how much you’ve spent,” Paner told Roxas, who replied: “Of course, I’m basically hocking my whole future for this.”

As for Binay, he told Paner he would make a report about his campaign finances after the elections.